Nigel Farage has confirmed his interest in becoming Mayor of London. 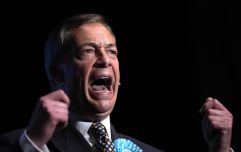 END_OF_DOCUMENT_TOKEN_TO_BE_REPLACED

The former UKIP leader responded to reports that he had been approached to take on the top job in the capital, saying he had been "bombarded" with messages requesting he contest the position.

Speaking on his LBC radio show, Farage said he would consider whether to stand over the coming week, with Sadiq Khan the bookies' favourite to keep his office in 2020.

Paddy Power currently have Farage at 100/1: "We’re sure it’ll be a popular selection - unlike Nigel," a spokesperson said.

The Brexiteer said: "A group of people have approached me.

"They say 'look there are more people in London that voted for Brexit than voted for Sadiq Khan when he became Mayor.'

"And actually if you look at the numbers that is true.