New Zealand is in mourning after 40 people were shot dead and 20 more were injured in a mass shooting at two different mosques in Christchurch on Friday afternoon. 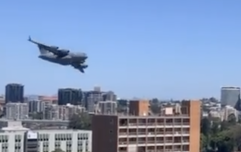 END_OF_DOCUMENT_TOKEN_TO_BE_REPLACED

The prime minister of New Zealand, Jacinda Arden, has condemned the ideology of those behind the anti-muslim attack.

"You may have chosen us but we utterly reject and condemn you," she said.

She went on to state that New Zealand represents "diversity and compassion," and is "a home for those who share our values, a refuge for those who need it."

Some of Arden's peers have not been so sympathetic. Australian Senator Fraser Anning showed a callous lack of compassion, using the attack as an opportunity to promote an anti-Islam agenda despite the attack being targeted at the muslim community.

Without even the courtesy to express any condolences for those affected by the attacks, Anning jumped head first into an anti-muslim tirade, tweeting: "Does anyone still dispute the link between Muslim immigration and violence?"

I reiterate: this was a mass shooting at two mosques, targeted at the muslim community.

Anning has since deleted some tweets, but of course, there are screenshots.

"Today's shootings in Christchurch highlight the growing fears within our community both in Australia and New Zealand over the increasing muslim presence," he said.

And it didn't stop there. The right-wing Australian politician issued a press release, in which the third line begins with 'however'.

To be suggesting that the innocent victims of today’s gun massacre in New Zealand were “Muslim fantatics” is appalling and abhorrent. Words matter. Rhetoric matters. Shame on you Fraser Anning.This is not the views of Australians #newzealandterrorattack #ChristchurchMosqueAttack pic.twitter.com/8CswhEM31v

Anning has been hammered on social media for his insensitive, anti-muslim rant, with some people calling for his resignation.

@fraser_anning You are bigotry and hatred personified, resign.

YOU are not compatible with Australia and it’s politics.

Anning is an advocate of citizens having the rights to possess guns in Australia, he is staunchly anti-immigration and wants Australia to leave the United Nations.

Such ignorant comments should therefore maybe not come as a surprise.