A new Covid variant, not only thought to be more transmissible than the Delta variant but being labelled as "the worst one we've seen so far", has led the UK government to apply immediate travel restrictions to six African nations said to be under threat. 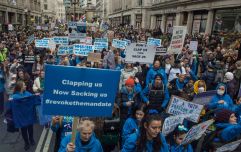 END_OF_DOCUMENT_TOKEN_TO_BE_REPLACED

The new 'super strain' designated B.1.1.529, which had previously been identified in South Africa earlier this year, is thought to spread more quickly than any other type of Covid-19 and Health Secretary Sajid Javid says that "the vaccines that we currently have may be less effective".

The Hong Kong government detected two cases of a new coronavirus variant identified in South Africa, which scientists have warned shows a “big jump in evolution” and could limit the effectiveness of vaccines. https://t.co/5k10iiIf56

As such, flights from South Africa, Namibia, Lesotho, Botswana, Eswatini and Zimbabwe have all been suspended until 4am on Sunday at the very least, though further travel restrictions could come into place.

One of the dangers of the South African variant is that the variant is said to have as many 30 mutations - twice as many as the Delta variant - making it much more difficult to treat as the virus adapts to evade the immune response that follows infection and vaccination.

Experts believe the variant can still be detected by a regular PCR test and as such, those returning from South Africa and the other red-listed countries on the continent before the 12pm cut off today will be thoroughly and carefully tested.

END_OF_DOCUMENT_TOKEN_TO_BE_REPLACED

While no one is reported to have tested positive for the in the UK so far, about 500-700 people travel between the UK and South Africa alone each day and these figures are naturally expected to increase as we approach Christmas.

Scientists are deeply concerned about the spread of this new Covid variant, with 59 confirmed cases in South Africa, Hong Kong and Botswana. Anyone who has travelled from one of these countries in the past 10 days is being invited to come forward.

popular
Man dies three days 'after GP sent him home and threatened to strike him from surgery list'
Peter Dinklage calls Snow White and Seven Dwarfs remake 'f*cking backwards'
Driver arrested on suspicion of murder after knifeman 'hit with car while stabbing woman'
McDonald's launching new Big Mac with twist for first time ever in UK
Marcus Rashford responds after being pictured with disgraced rapper Wiley
Outrage after Sadio Mané allowed to play on for 10 minutes after being knocked out
Podcast host refuses to apologise for saying he'd leave his wife if she got fat after childbirth
You may also like
Sport
Premier League to consider changing rules on covid postponements
News
Nearly two-thirds of covid jab side effects could be placebo, study finds
Life
Morrisons becomes first UK supermarket to cut sick pay for unvaccinated staff
News
Piers Morgan sums up why 'Partygate' is so damaging in two minutes
News
Winter Olympics tickets to not go on sale to the general public
Next Page