While we were all panicking over the state of Christmas thanks to covid, NASA has warned of an incoming asteroid the size of the Eiffel Tower. 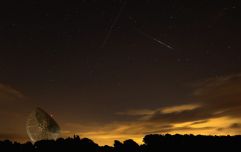 END_OF_DOCUMENT_TOKEN_TO_BE_REPLACED

The astronomical piece of space rock is around 1,082 foot and should skim past us on December 11.

The asteroid, named 4660 Nereus, concerns space scientists because it comes within 4.6 million miles of Earth. Nereus has been placed within the "potentially hazardous" category and is expected to get no closer than 2.4 million miles of us.

Asteroids are always quite scary - not because of the hundreds of disaster films - but because you can literally do nothing if it suddenly decides to change course. However luckily, Nereus should pass right by us at the slow speed of 14,700 miles an hour!

NASA considers anything within 120 million miles of our planet as a Near-Earth Object (NEO). The space government body constantly has NEO's monitored, just in case one decides to try out Earth as a potential crash zone.

This isn't even the first time Nereus has come to say hello and was actually discovered in 1982 by astronomer Eleanor Helin.

Since it likes to hang in our neck of the galaxy, NASA and the Japanese space agency (JAXA) once played with the idea of "punching" it off course with the Hayabusa spacecraft.

Instead, the space agencies have settled on Asteroid 25143 Itokawa as part of their Double Asteroid Redirection Test.

Could NASA punch it closer to us so we don't have to listen to Christmas songs for the next month? Asking for a friend...

popular
Man dies three days 'after GP sent him home and threatened to strike him from surgery list'
Driver arrested on suspicion of murder after knifeman 'hit with car while stabbing woman'
Peter Dinklage calls Snow White and Seven Dwarfs remake 'f*cking backwards'
Marcus Rashford responds after being pictured with disgraced rapper Wiley
Outrage after Sadio Mané allowed to play on for 10 minutes after being knocked out
Schoolboy loses both nipples after classroom dare involving two cans of Lynx
Brewdog to sue BBC over allegations made in new documentary
You may also like
Life
Devastating solar storm 'could send mankind back to Dark Age', says new study
Life
'Mystery house' spotted on moon to be investigated by China
Sport
Freddie Flintoff wants Jeff Bezos to send him to space to prove Earth's not flat
News
Pentagon sets up new taskforce to investigate UFO sightings
News
People think they've spotted an alien in Mars Rover pictures
Next Page