It's not even the day of the big game between Arsenal and Manchester United and already one Red Devils legend is firing shots.

Gary Neville has stuck the boot in one the Gunners over their big match preparations ahead of Sunday's clash at the Emirates Stadium.

The former United defender reckons Wengers men won't have even given a thought to the personal duels they will be facing two days before the big game.

Instead he believes they're more concerned with putting on  show.

Writing in his Daily Telegraph column, Neville said: "I may be wrong, but I sense that Arsenal players go into training on Friday morning thinking about how they’ll pass the ball, score with a bicycle kick, how much fun they are going to have.

"On the Saturday morning they still might not be switched on. Sunday morning is too late. It’s fatal to think like that before a big game."


Neville gave a bit of advice to Arsenal's back four on how they should be dealing with the threat of United's attackers. 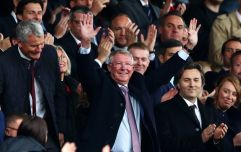 END_OF_DOCUMENT_TOKEN_TO_BE_REPLACED

"If I’m Per Mertesacker this weekend, on the Friday morning before a Sunday game of this magnitude I would be thinking: I need to communicate to Hector Bellerin that Memphis Depay will always try to cut inside on to his right foot, and that I need to be there inside to help him, although I need Bellerin to show him the outside.

"Is Bellerin thinking he has to stay tight to Memphis, and to pull Aaron Ramsey back towards him, so that I (Mertesacker) don't get exposed by Anthony Martial in a channel one on one for pace?"

That will go down well in North London.


popular
Arsenal-bound Willian posts farewell message to Chelsea fans
QUIZ: Name every WWF champion from the Attitude Era
The 11 unbreakable rules of making a cup of tea
Ben Stokes to miss remainder of Pakistan series
The JOE Friday Pub Quiz: Week 203
Young guys absolutely lose it hearing Phil Collins' In The Air Tonight for the first time
Who is the most handsome footballer in the Premier League?