He's not letting this one go.

An Australian man who claims to be the illegitimate son of Prince Charles and Camilla Parker Bowles has released his latest batch of "evidence" to prove his claim. 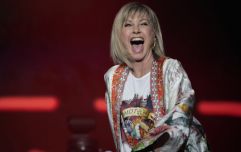 END_OF_DOCUMENT_TOKEN_TO_BE_REPLACED

Simon Dorante-Day has previously said that his eyes and teeth were changed when he was younger in order to cover up his existence, and he's now back with what he says is further proof of his royal roots.

The 55-year-old shared a post on Facebook urging viewers to spot the resemblance between his son and the Queen herself, with the caption "uummmm an interesting comparison."

One wrote: "I see [a] mouth and nose similarity. Maybe face shape and hair colour also."

Another commented that the teen was "the double of the queen in her older years."

And a third said: "For sure you would have to be blind or bloody ignorant to not believe they are related."

Recently, Simon also posted a montage of pictures including a snap of himself next to one of Prince William.

Yet again, people commented on the similarity between Simon and his supposed half-brother.

"OMG the likeness to William is amazing,I thought it was two pics of Simon," one wrote.

"My goodness, you and William are twins," said a second.

And another agreed: "Amazing family resemblance! The evidence is becoming overwhelming."

This one was sent in by Kirsten, thanks for agreeing to share it, quite an interesting group of comparisons 😍

Are you still keeping up with this?

His Facebook is littered with posts from Simon of him comparing himself to the royals, eager to point out how similar he looks to them.

I won't go into the details here, because of course it's all complete and utter horse shit.

But Simon's pretty convinced and believes that he has been part of a major cover up to keep his identity secret as the illegitimate child of the Prince of Wales.

He's is so convinced by his own royal claims that he has even gone to the Australian High Court to demand that the Duke and Duchess take DNA tests. You won't be surprised to hear that he's failed on three previous occasions to get the royals to take any tests.

popular
Landlord faces £40k fine after tenant puts swimming pool on roof of flats
Graeme Souness under fire for calling football a ‘man’s game' while sat with Karen Carney
Incredible case of the only known individual whose parents were two different species
Comedian cancelled after ‘getting his penis out on stage’ during Edinburgh Fringe Festival
Man with laughing condition like The Joker accused Joaquin Phoenix of stealing his persona
JK Rowling told 'you are next' after stabbing of acclaimed author Salman Rushdie
The reason why Nottingham Forest don't have a sponsor on their shirt
You may also like
Life
Woman takes out full-page ad to get back at cheating husband - and uses his credit card to pay for it
Sport
"He’s shown true courage" - Wallabies captain Michael Hooper backed for brave mental health decision
Food
Backpacker fined $2,664 for taking McDonald’s from Bali to Australia, breaking biosecurity laws
Entertainment
Liam Gallagher lays into fans who kicked off with him on a plane in Australia
News
Man who filmed rape of 2-year-old given special privileges because of 'human rights'
Next Page