Man to face trial for alleged theft of Creme Egg

You couldn't make it up.

A man in Dublin, Ireland is facing prosecution over the alleged theft of a €3 (£2.53) box of Cadbury Creme Eggs. 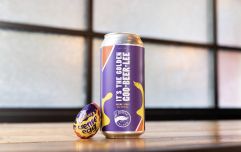 END_OF_DOCUMENT_TOKEN_TO_BE_REPLACED

Irish newspaper The Herald reports that Judge Anthony Halpin expressed his surprise at the details of the case before him at Dublin District Court.

The accused, Anthony O'Connell (41), pleaded not guilty to the charge of stealing a €3 box of the chocolate eggs from Lidl on Moore Street in the city on March 9.

"Three state witnesses, him, a judge and a solicitor, for a Cadbury's Creme Egg?

"You couldn't make this stuff up.

"Is it the chicken or the egg which came first anyway?"

The case has been adjourned for trial.

popular
Woman reveals cruel reason date dumped her after they had sex for the first time
Kylian Mbappe asked PSG to sell Neymar and replace him with Ousmane Dembele
Leeds and Burnley demand Everton keep all documents in finances row
Topless woman crashes Cannes Film Festival red carpet to protest 'sexual violence' in Ukraine
The JOE Friday Pub Quiz: Week 295
Dog owners warned this gesture from pet could be a sign of illness
Fan 'stamped on by Oli McBurnie' feared he was 'going to die'
You may also like
Food
Creme Eggs are only 20p at Tesco this week as part of a bargain deal
Food
Full sized Oreo Crème Eggs are coming to the UK
Food
The first white Cadbury Creme Egg has been found
Life
This man claims he invented the Oreo Creme Egg two years ago
Life
PIC: Someone has invented a Cadbury's Creme Egg pizza and it looks amazing
Next Page