Great, so now we have to worry about a demon too

A magical Japanese boulder that has been supposedly been holding a demon for 1,000 years has suddenly cracked open, presumably releasing said demon into the world.

Sessho-seki - or 'Killing Stone' as its often called - is believed to contain a powerful demoness called Tamamo-no-Mae - but on March 5, the boulder cracked opened.

While the prevailing theory is "natural weathering", Japanese mythology points to another conclusion.

END_OF_DOCUMENT_TOKEN_TO_BE_REPLACED

Legend dictates that the stone is actually the corpse of Tamamo-no-Mae fashioned into a holding cell for her spirit. During Japan's Edo period, which ran from 1603 to 1867, Tamamo-no-Mae is said to have possessed the concubine of King Zhou and bewitched him to create a reign of terror.

This led to the eventual rebellion that decimated the Shang Dynasty. She is then said to have journeyed to ancient India, where she repeated the process with crown prince Banzoku. Tamamo-no-Mae would repeat her pattern for some time until eventually arriving in Japan.

Here are some traditional depictions of the nine-tailed fox demoness Tamamo-no-Mae: pic.twitter.com/0L5qifniHu 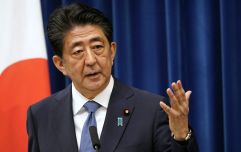 END_OF_DOCUMENT_TOKEN_TO_BE_REPLACED

Her next victim, Emperor Toba, found a lucky escape thanks to an astrologer who identified his mistress as a fox spirit, often referred to as Kitsune. Mythology suggests that Tamamo-no-Mae embedded herself in the rock as she attempted to flee the Emperor's assassins Kazusa-no-suke and Miura-no-suke.

The stone was later nicknamed the 'Killing Stone' under the belief it continuously let out poison gas. Rumours say touching the stone is enough to kill you.

With the stone now open, many believe that Tamamo-no-Mae is now free.

Another theory suggests that the breaking of Sessho-seki is a bad omen for impending destruction. Great.