The video caused widespread outrage after emerging on Friday

You'll have no doubt had the displeasure of viewing a video that went viral over the weekend of a MAGA hat-wearing teenager visibly mocking a Native American man at the Indigenous People's March in Washington D.C. on Friday.

The student, from Covington Catholic School in Kentucky, has now denied that this was the case, instead claiming that he was attempting to defuse the situation after the protestor, Nathan Phillips, approached him. 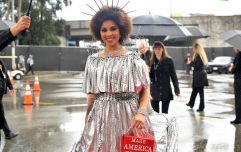 END_OF_DOCUMENT_TOKEN_TO_BE_REPLACED

Nick Sandmann, in a lengthy statement provided to the media, said:

“I am providing this factual account of what happened on Friday afternoon at the Lincoln Memorial to correct misinformation and outright lies being spread about my family and me.”

“The protester everyone has seen in the video began playing his drum as he waded into the crowd, which parted for him. I did not see anyone try to block his path. He locked eyes with me and approached me, coming within inches of my face. He played his drum the entire time he was in my face.”

“I never interacted with this protester. I did not speak to him. I did not make any hand gestures or other aggressive moves. To be honest, I was startled and confused as to why he had approached me. We had already been yelled at by another group. 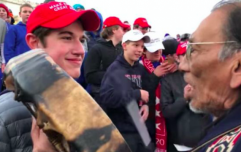 END_OF_DOCUMENT_TOKEN_TO_BE_REPLACED

“I believed that by remaining motionless and calm, I was helping to diffuse [sic] the situation. I realised everyone had cameras and that perhaps a group of adults was trying to provoke a group of teenagers into a larger conflict.”

“I was not intentionally making faces at [Mr Phillips]. I did smile at one point because I wanted him to know that I was not going to become angry, intimidated or be provoked into a larger confrontation.”

Just in: Statement of Nick Sandmann, Covington Catholic High School junior, about the event at the Lincoln Memorial: pic.twitter.com/PkuMh2cVZM

Darren Thompson, an organiser of the Indigenous Peoples Movement said in a statement that the incident was “emblematic of our discourse in Trump’s America”.

END_OF_DOCUMENT_TOKEN_TO_BE_REPLACED

“It clearly demonstrates the validity of our concerns about the marginalisation and disrespect of indigenous peoples, and it shows that traditional knowledge is being ignored by those who should listen most closely,” he added.

Nathan Phillips, the Vietnam war veteran and Omaha elder seen playing the drum in the video, has since stated that he found the situation "intimidating" in an interview with the Washington Post.

“It was getting ugly, and I was thinking: ‘I’ve got to find myself an exit out of this situation and finish my song at the Lincoln Memorial,” he said.

“I started going that way, and that guy in the hat stood in my way, and we were at an impasse. He just blocked my way and wouldn’t allow me to retreat.”

Phillips also gave a heartfelt, emotional interview after the incident that has since received over 100,000 likes on Twitter, in which he concludes:

"I wish I could see that energy of those young men put into actually making this country really great."

Let us end on his words, rather than those of a family lawyer-approved press statement from a wealthy white family.