London's iconic New Year's Eve fireworks display on the River Thames has once again been cancelled amid "uncertainties due to Covid."

According to Metro, plans to hold a different and as-yet-unrevealed Trafalgar Square event are currently underway so London's New Year's Eve revellers will still be able to attend a party in the capital.

END_OF_DOCUMENT_TOKEN_TO_BE_REPLACED

This news comes amid growing uncertainty over both London and the UK's situation with Covid in the coming months, with fears rising that the colder weather could contribute to a spike in cases.

A spokesperson for the Mayor of London Sadiq Khan said today (October 12): "This year, as always, London will be welcoming the new year in a spectacular way.

"Due to the uncertainty caused by the Covid-19 pandemic, our world-famous New Year’s Eve display will not be held on the banks of the Thames this year.

"Last year's successful show took place in a slightly different way due to the pandemic, and this year a number of exciting new options are being considered as part of our New Year’s Eve celebrations in London.

"Further details of this year's celebration will be announced in due course," they added.

Last year's festivities were cancelled due to the growing threat of Covid-19. The government encouraged people to celebrate with those in their household, while a lot of people watched the Thames display from the comfort of their homes. 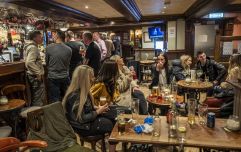 END_OF_DOCUMENT_TOKEN_TO_BE_REPLACED

Though the exact nature of the Trafalgar Square celebration has not yet been revealed, it can be assumed it'll be something of a similar nature to the 2020 display where a light show depicted pandemic heroes like Captain Sir Tom Moore.

popular
'Super recogniser' draws 'accurate' modern Maddie McCann to help police find her
Mum in jail for murder pays tribute to son, 6, killed by his dad and new girlfriend
Chilling video shows moment step mum tried to get away with murdering boy, 6
Jack Wilshere could be set to resume career with National League Wrexham
The JOE Friday Pub Quiz: Week 272
Divock Origi reveals what Klopp said to him before scoring crucial winner
'I did three grams of coke during a game': Inside football's problem with Class A drugs
You may also like
News
Several children in hospital after ceiling collapse at London school
Life
BBC presenter's dog Cabbage has been found along with five others
News
Venomous sharks discovered in the River Thames
Sport
'Scariest Man on the Planet' vs 'Iranian Hulk' fight date and venue confirmed
News
Boris Johnson to fly back from Glasgow to London despite COP26 climate warning
Next Page