Jeremy Hunt has wrongly claimed Slovenia was a "vassal state" of the Soviet Union.

He was visiting Ljubljana to discuss the Brexit negotiations with his counterpart Miro Cerar, but instead demonstrated ignorance of the country's recent history.

Slovenia was a state, within Yugoslavia, outside of the iron curtain.

Jeremy Hunt casually saying that Slovenia was a “Soviet vassal state”. Former president of Slovenia saying, “he comes to Slovenia asking us for a favour [to discuss how to avoid a no-deal] while arrogantly insulting us. We were never a vassal state” 🇪🇺

Jeremy Hunt said: "This is my first visit to Slovenia as foreign secretary, not the first in my life, but my first in a professional capacity. 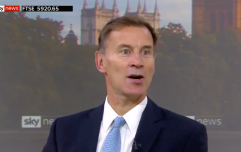 Home workers need the 'fizz and excitement' of an office, says Jeremy Hunt

END_OF_DOCUMENT_TOKEN_TO_BE_REPLACED

"I’m really happy to be here, because as a fellow European country the UK is very proud of the transformation there has been in Slovenia over the last 30 years.

"A really remarkable transformation from a Soviet vassal state to a modern European democracy, a member of the EU, a member of Nato, a country with a flourishing economy, growing its tourism year in, year out, and this is really an example of Europe at its best."

Milan Brglez, the former speaker of Slovenia’s national assembly, responded on Facebook, writing: "We have never been 'the vassal state of the Soviet Union.'

"At a minimum what I expect from my representatives is that they will react immediately when someone insults the state and its citizens. And not that they are meekly silent, perhaps not even noticing the insult."