Radiohead. The Who. Beyoncé. Sir Paul McCartney. Adele. Jeremy Corbyn. What do all these names have in common?

They've all been at the centre of a rebirth of socialism in the Labour party. 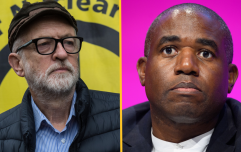 END_OF_DOCUMENT_TOKEN_TO_BE_REPLACED

But one, arguably more so than the others, has been the figurehead of a major resurgence in left-wing politics. Jeremy Corbyn, of The Jeremy Corbyn Experience, took to Glastonbury's Pyramid Stage this afternoon for a special slot.

Brought to the stage by festival founder and karaoke enthusiast Michael Eavis, Corbyn was met with what surely must now be the official Song of the Summer, "Oh, Jeremy Corbyn". To say they were pleased to see him would be an understatement.

Thank you #Glastonbury for inviting me to speak on the Pyramid Stage about how, together, we can build a country #ForTheMany, not the few. pic.twitter.com/vutOyFsFSo

Bands and artists know that if you're playing to a festival crowd, they don't want to hear album tracks or b-sides - they want the hits and nothing but the hits, and if left-leaning political declarations are music to your ears, Corbyn's set was wall-to-wall bangers.

Education, housing, pensions, refugees, love, music, the commentariat, wages, the peace movement, the environment - hit after hit after hit, and the crowd, reportedly one of the biggest of the weekend so far, went mad for it.

It was classic Corbyn, just what the people had come to see. Raucous cheers went up almost every time Corbyn paused, with the man of the hour having to shout over continuing chants of "Oh, Jeremy Corbyn". 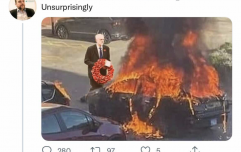 END_OF_DOCUMENT_TOKEN_TO_BE_REPLACED

Taking to the stage in a simple blue shirt and white slacks combo, Corbyn opted for a more intimate set - not the kind of big, flashy set-ups that the Pyramid Stage is used to. This is perhaps why he was lower down the bill than more polished performers like Foo Fighters and Katy Perry.

As far as the staging was concerned, he just borrowed the next band, Run The Jewel's stage set-up, whom he was touted to introduce, but sadly did not.

Alas, it may never come to pass that we witness Jeremy Corbyn picking up the mic and shouting: "THIS SHIT IS ABOUT TO GO OFF. PUT YOUR FISTS AND GUNS IN THE AIR FOR RUN. THE. MOTHERFUCKING. JEWELS."

Closing out his 15-minute set with a cover of Percy Bysshe Shelley's poem The Masque of Anarchy, Corbyn recited:

Which in sleep had fallen on you –

Ye are many - they are few.

And then he was off. Short but sweet, though who knows? Perhaps we'll see Corbyn back as a headliner one year. Whether you're into Corbyn's stuff or not, there's no denying that he's a big draw.