You had one job.

The EFL made a colossal error in their statement after Jack Grealish was punched in the face by a Birmingham City fan.

The incident, which occurred in the ninth minute of the game, saw a fan sprint onto the pitch from the corner flag and throw a punch right at the back of the 23-year-old's head.

The fan was immediately detained by a steward before being surrounded by furious Aston Villa players.

As he was escorted off the pitch in the direction of police officers, the supporter can be seen blowing kisses to other Birmingham City fans who are heard cheering.

The fan was arrested by police immediately afterwards.

In their statement about the attack, the EFL somehow managed to say it "condoned" the incident.

an @efl statement on the fan running onto pitch and punching Aston Villa Captain Jack Grealish during derby pic.twitter.com/qF4AF94rxM 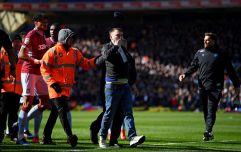 END_OF_DOCUMENT_TOKEN_TO_BE_REPLACED

The typo was quickly corrected to read "condemns."

The second city derby was littered with controversy. Grealish responded to the punch by scoring the game's only goal.

In the celebrations a Birmingham City steward appeared to be over-zealous in redirecting Grealish back to the pitch after celebrating with the Villa fans. Immediately afterward, it looked like the steward was led away from the pitch by police.

Birmingham released a statement after the game, in which they condemned the behaviour of their supporter and offered their full apologies to Grealish and Villa.

"Birmingham City Football Club would like to apologise to Jack Grealish and Aston Villa Football Club for an incident in this afternoon’s derby match," reads the statement.

"We deplore the behaviour of the individual who committed this act and rest assured he will be banned from St. Andrew’s for life. The Club will also support any further punishment this individual may face in the eyes of the law.

"The Club will be working with the relevant authorities to investigate all the circumstances and we will be reviewing our stadium safety procedures.

"What happened has no place in football or society. Jack is a Birmingham lad and regardless of club allegiance should not have been subjected to this – there are no excuses.

"Again, we apologise to Jack and all at Aston Villa Football Club."