Insulate Britain has requested that people not use the M25 motorway so they can safely host their latest wave of protests on it.

END_OF_DOCUMENT_TOKEN_TO_BE_REPLACED

Having had a break recently, the group are back with a vengeance. Over the past few weeks, the protest collective has seen itself rise from obscurity, having broken headlines and tested people's patience countless times.

The group has asked that people do not use the M25 at all, but if needed, they reduce their speed to 20 mph to prevent accidents. They have also requested that the Highway agency acts on its responsibility to keep the public safe by enforcing the speed limit.

While they will ensure that emergency blue light access is maintained, they are demanding that the police refuse to arrest them as they are merely upholding the British constitution.

Their goal? To get the government to insulate all UK homes by 2030 to fast-track the cutting of carbon emissions.

Despite a nationwide injunction forbidding them to protest on motorways and major A roads across England, the group has stated it is "not concerned" with any red tape. The latest plans suggest that the group will use the M25 on Wednesday October 27 to house their latest "site of nonviolent civil resistance".

END_OF_DOCUMENT_TOKEN_TO_BE_REPLACED

"Starting from 7:00 on the morning of Wednesday 27th October the M25 will become a place of nonviolent civil resistance to stop our Government committing crimes against humanity.

"This Government, our Government, is actively pursuing policies that will lead to the destruction of our country due to climate catastrophe. In a free society, citizens have the right and a duty to rebel against plans which will knowingly result in the deaths of millions." 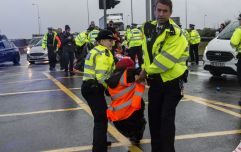 END_OF_DOCUMENT_TOKEN_TO_BE_REPLACED

They continued to say they acknowledge the 'inconvenience and irritation' they are causing throughout their campaign.

They continued: "We ask that you understand that the days of disruption are necessary to force a government to fulfil its most basic of duties to protect and defend its people.

"Insulate Britain considers the UK Government to be in treasonous betrayal of this country," the group concluded.