She said he lamented 'the death of journalistic integrity'

An influencer has claimed that she had a 90-minute phone call with Johnny Depp during his defamation case against Amber Heard that saw him be awarded $10m in damages.

END_OF_DOCUMENT_TOKEN_TO_BE_REPLACED

Jessica Reed Kraus posted daily updates from the trail in Fairfax, Virginia, and told her 900,000 followers that an "old friend" introduced her to the actor after seeing her coverage on Instagram.

On Tuesday, the self-declared "Hollywood Philosopher" claimed to have spoken to the 58-year-old actor on April 11, the same day the trial kicked off. Kraus claims to have been introduced through a friend who she referred to as a "valuable resource" for her coverage. She did not name the person.

END_OF_DOCUMENT_TOKEN_TO_BE_REPLACED

While conversing about the trial, the unnamed friend is said to have invited an anonymous source to talk. He needed "no introduction", according to Kraus, and his voice "booms through the phone."

Kraus added: "'I don't know you' [Depp] says, 'but I know, just by the words you use and the aesthetic in your work, that I trust you.'"

She also said he came off as "smart, curious, funny and polite." 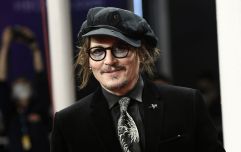 END_OF_DOCUMENT_TOKEN_TO_BE_REPLACED

The story was posted to the Influencers Substack, which requires a membership to view in full. During their supposed conversation, the pair were said to have discussed his "tendency to trust the wrong people", as well as his favourite books and his general distaste for the media.

The actor allegedly lost faith in the media after a 2018 Rolling Stones article unpacked his financial struggles.

Speaking to Insider, the fangirl said that she was able to meet Depp at a cocktail party after he'd testified. He apparently thanked her "for caring enough to carve [her coverage] with intention", unlike the media organisation which had "failed him so many times before."

Kraus' claims have not been substantiated by anyone else and come after a man pretending to be a juror recently spoke out as a prank.

popular
People want ‘offensive’ Crown Paints advert banned after attracting hundreds of complaints
Incredible case of the only known individual whose parents were two different species
TikTokers are utterly convinced there is a secret zombie apocalypse going on in China right now
Jamie Foxx and Snoop Dogg's vampire movie surges to the top of Netflix charts
Darius Danesh opened up about his health struggles before his tragic death aged 41
Teacher's sex abuse sentence delayed after she gives birth
Cyclists may have to get number plates under radical shake-up of road laws
You may also like
Entertainment
Johnny Depp to take the director's chair for the first time in a quarter of a century
Entertainment
Christina Ricci says Johnny Depp told her 'very matter of factly what homosexuality was' when she was 9
News
Johnny Depp's 'erectile dysfunction' sparked alleged sexual assaults on Amber Heard, unsealed court docs claim
News
Unsealed Johnny Depp versus Amber Heard court docs reveal sensational claims the jury never heard
News
Amber Heard sells beloved desert home after being ordered to pay Johnny Depp $8.3m
Next Page