‘I’m getting death threats,’ says the man who threw milkshake on Tommy Robinson

"I’d be willing to bury the hatchet with Tommy. I guess we could shake on it", said Danyaal Mahmud

Tommy Robinson, the founder of the English Defence League and an adviser to Gerard Batten (the Leader of UKIP), had a milkshake dumped on his head while confronting a man on the streets of Warrington towards the end of last week.

Naturally, the video of the incident went mega viral, and we'd be absolutely amazed if you haven't seen the footage yet.

The man who dumped the milkshake over Robinson's head, Danyaal Mahmud, has now done an interview with The Guardian, where he stated that he has been receiving death threats on social media.

He said: "I’m a low-key person, I didn’t anticipate this publicity and I don’t want it – I’m getting death threats on social media and I am worried about me and my family being targeted." 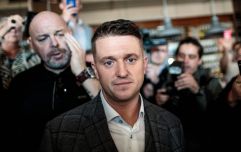 END_OF_DOCUMENT_TOKEN_TO_BE_REPLACED

But with one line, it's clear that Mahmud definitely has a sense of humour. He said: "I’d be willing to bury the hatchet with Tommy. I guess we could shake on it."