Tens of thousands of demonstrators have taken to the streets of London to protest Donald Trump's four-day "working visit" to Britain on the day he is scheduled to meet both Theresa May and the Queen.

On his only full day of business during his trip to Britain, protests began in Parliament Square this morning where the Trump baby blimp was flying high, or at least high-ish, depicting the US President as a screaming, fluorescent orange baby holding a mobile phone with the Twitter app open.

The president's visit has seen the largest police operation since the 2011 riots with a £10 million "ring of steel" erected to keep protesters away from Trump.

They’re slowly inflating a Trump-shaped balloon at Parliament square, which has been generously described as a “blimp.” Still one tubby boi tho pic.twitter.com/ktzAmjh5UM

Protesters converged to march against the president and his right-wing policies, ranging from immigration and race-relations to gender equality and and climate change, with many travelling via coach from cities up and down the country.

Sheila, one of the artists behind the Trump baby inflatable, told JOE.co.uk: "Whilst representing Trunp's inflated ego, and his thin skin, this is also about opposing his hate-fuelled, misogynistic politics."

Sheila, Twitter babysitter, is part of the team of artists behind the installation. “Whilst representing Trump’s inflated ego, and his thin skin, this is also about opposing his hate-fuelled, misogynistic politics.” pic.twitter.com/qy0GPf9GjY

END_OF_DOCUMENT_TOKEN_TO_BE_REPLACED

Madelaina, who came dressed as 'the EU super girl', simply said: "I hate Donald Trump and I hate Brexit."

An unnamed woman, dressed as a Guantanamo Bay detainee with an upside down American flag and her head covered, said: "The flag's upside down not to be offensive but to protest the locations of US military bases in the UK. We're at RAF Menwith Hill in North Yorkshire every week."

Unnamed: “The flag’s upside down, not to be offensive but to protest the location of US military bases in the UK. We’re at RAF Menwith Hill in North Yorkshire every week.” pic.twitter.com/UuWVUySbTB

Ron, a 47-year-old American business consultant told us: "I found it quite insulting the American Embassy advised us to keep a low profile. There's only one American who shouldn't be here today."

Erin, a teacher who arrived to the protests dressed as a pigeon, said: "I have an Instagram account called the pigeon. I'm from California on holiday here. My friends told me and I HAD to come see baby Trump."

Erin, 53, teacher. “I have an Instagram called the pigeon. I’m from California on holiday here. My friends told me and I HAD to come see baby trump.” pic.twitter.com/TBLfx7fMOD 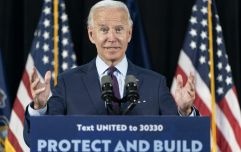 END_OF_DOCUMENT_TOKEN_TO_BE_REPLACED

Following the morning gathering underneath the Trump baby blimp at Parliament Square, many made their way to Portland Place where a rally organised by the Stop Trump collation began around 2pm, culminating in speeches being delivered by Owen Jones and others at Trafalgar Square.

There are A LOT more people here than the NHS march two weeks ago, and it’s much noisier pic.twitter.com/HGqrdDowbL

A petition to prevent an official state visit by Trump began in 2017 and attracted 1.8 million signatures. The issue was then debated in parliament several times along with the President himself delaying his visit on more than one occasion. This is now, apparently, a 'lower-level' working visit.

Donald Trump will meet the Queen at Windsor Castle late on Friday afternoon for high tea.

Whatever the fuck that is.


popular
The JOE Friday Pub Quiz: Week 198
QUIZ: Name these 30 football badges
QUIZ: Identify the 90s film from a single image
QUIZ: Can you beat the clock and name all 26 James Bond movies?
This is how much time most men need after orgasm before they're ready for another round
QUIZ: Guess the collective noun for the animal
Kasabian lead singer Tom Meighan steps down over "personal issues"

You may also like
News
American boomers lose the plot over mandatory face mask orders
News
Donald Trump speculates on Covid-19 testing in the United States
News
Why publishing fake news works for Donald Trump
News
Is Joe Biden too old to be president of the United States?
News
Boris Johnson challenged to say 'Black Lives Matter' in parliament
Next Page