Good Morning Britain has paid for a large advert right outside the BBC Breakfast studio.

Legally the BBC can do nothing about it.

The massive digital billboard advertises the BBC's rival breakfast show as "not your average breakfast" and is on a rolling loop all of today.

This is what Piers Morgan looks like (Credit: Jeff Spicer)
Advertisement

Good Morning Britain presenter Piers Morgan, loving it, said: "We thought we’d do for a bit of fun, we were trying to think, where could we put this, on a rolling loop all day long, on a giant digital billboard? So we chose, ah… you may recognise this, this is the BBC Breakfast headquarters, up in Salford Manchester. 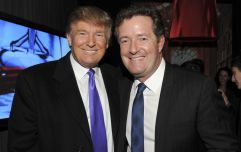 END_OF_DOCUMENT_TOKEN_TO_BE_REPLACED

"So everyone who arrives at the BBC Breakfast offices today will be confronted by a rolling loop of how brilliant Good Morning Britain is.”

"Apparently, Walker [presenter Dan Walker] isn’t in today. But the others, when they pop up today, [Louise] Minchin, [Charlie] Stayt… [they’ll see it].

"It’ll start to annoy them once they realise what’s going on. Then they’ll try and get it removed and they can’t legally, it’s there all day."

Piers added: "We’ll find out when Walker is back and do it all over again!"