'Friends' reunion criticised as no Black stars are due to appear

The reunion episode is airing May 27.

The highly-anticipated Friends reunion has attracted criticism from fans because it does not feature any Black actors in cameos.

On Thursday 13 May, HBO Max announced the list of celebrities that would be making a guest appearance in the episode. Those who will be making a cameo include James Corden, David Beckham, Lady Gaga, Kit Harington and Malala Yousafzai.

We're going to need a bigger couch. Catch these special guest appearances in the #FriendsReunion streaming May 27 on HBO Max. pic.twitter.com/1VVYCdtpqv 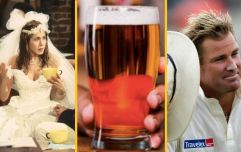 END_OF_DOCUMENT_TOKEN_TO_BE_REPLACED

However the list has been criticised. Even though there are a number of POC cameos, not one of the 25 celebrity guests is African-American.

The special will also not feature African-American actress Aisha Tyler, who portrayed Ross's love interest Dr. Charlie Wheeler for nine episodes in the final two series of the show.

One Twitter user wrote: "Ah yes. FRIENDS. After convincing us that NYC has no Black or Brown people in it for 9 seasons, they issue a reunion with 25 celebs and somehow evade finding a single Black person. [sic]"

Another said: "I do think that although it wouldn’t stop racism, I believe greater inclusion is a way to help all races feel at least more included. One out of 25 guest stars couldn't be Black?"

That’s just the way it was, why all of a sudden is it racist? It wasn’t racist before? 😂 it’s just more people trying to fuel all this shit in my opinion, we can’t expect racism to be stopped when people do stuff like this

A third simply asked "Why must James Corden infect everything" before suggesting what the premise of the reunion episode could be.

the premise of the Friends reunion episode will be: the Friends still don't know any Black people.

Another exclaimed: "Friends reunion! So many new friends! None of 'em Black! [sic]"

Friends reunion! So many new friends! None of 'em Black! https://t.co/LI5n0Bo0cF

Friends has often come in for criticism for its lack of diversity throughout its 10 series. In an interview with the Sunday Times in 2020, Lisa Kudrow was asked what she would change about the show if it were made today. Kudrow replied: "It would not be an all-white cast, for sure."

She went on to say: "I'm not sure what else, but, to me, it should be looked at as a time capsule, not for what they did wrong.

"This show thought it was very progressive. There was a guy whose wife discovered she was gay and pregnant, and they raised the child together. We had surrogacy too."