Four confirmed dead in aftermath of 'explosion' in Leicester

Four people have been confirmed dead in an explosion at a shop in Leicester.

Leicestershire Police declared a 'major incident' following an explosion in the Hinckley Road area of the city.

Four other people remain in hospital, one with serious injuries, the force said.

This footage shows the aftermath of an apparent explosion in the Hinckley Road area of Leicester. Police have declared a "major incident." More information as we get it. pic.twitter.com/ghVIGEYjdk 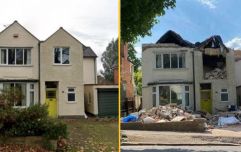 END_OF_DOCUMENT_TOKEN_TO_BE_REPLACED

Supt O'Neill said: "It is a dangerous scene so trained officers from the fire service and police took over as soon as possible.

"I can't say at this stage [what may have caused it] but it is a joint investigation between the fire service and the police and the priority is to make the area safe."

The incident is not believed to be terror-related.