Emmanuel Eboue has been arrested on suspicion of arson and malicious communications and is currently being held in a north-London police station, according to the Mirror.

The former Arsenal right back was detained outside a house in Enfield and friends of the player are reportedly concerned for his emotional wellbeing and mental state.

In 2017 Eboue opened up about his ongoing battle with depression and revealed that failed investments and a divorce settlement had left him poor and homeless.


Met Police released a statement which read: "Police investigating an alleged arson at a residential address in Enfield on Saturday, 30 June, arrested a 35-year-old man on suspicion of arson and malicious communications outside the address at around 17:00hrs on Saturday, 7 July.

"He was taken to a north London police station where he currently remains." 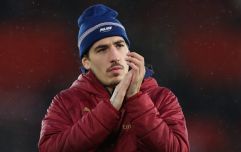 END_OF_DOCUMENT_TOKEN_TO_BE_REPLACED

The Ivorian made 214 appearances for Arsenal and represented his country on 79 occasions. He spent seven seasons with the Gunners before joining Turkish club Galatasaray in 2011. He signed a short-term contract with Sunderland in March 2016 but was then banned from all football-related activity for a year following a payment dispute with a former agent.

He left the club without making a single appearance and has since been unattached. In October last year Eboue was expected to sign for Türk Ocağı Limasol in Northern Cyprus before the move was cancelled following abnormal blood values being discovered during his medical.


popular
How many times can you see the number 3 on this iPhone screen?
QUIZ: Rock and alternative albums of the early 2000s
The JOE Friday Pub Quiz: Week 185
The definitive ranking of Premier League badges
The definitive ranking all 151 original Pokémon from worst to best
PlayStation and Xbox users will now be able to play against each other online
The JOE Friday Pub Quiz: Week 183

You may also like
Football
The 100% definitive, completely unarguable Liverpool/Invincibles Combined XI
Sport
Liverpool, Duncan Ferguson and Arsenal's managerial search
Football
How to fix Arsenal Football Club in nine and a half easy steps
Football
Evil José at Arsenal Episode 2: Ruining Roy Hodgson's Birthday, Liverpool and City
Sport
Was Granit Xhaka right? And what next for him and Arsenal?
Next Page