Britain has officially voted to leave the European Union

Well, that's that then.

Britain has voted in favour of leaving the EU on an unprecedented night in British politics. 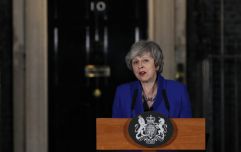 END_OF_DOCUMENT_TOKEN_TO_BE_REPLACED

With final results just in, the Brexit camp finished ahead with 52 per cent with Remain trailing on 48 per cent.

Votes were frantically counted in polling areas across England, Wales, Scotland and Northern Ireland and the Leave camp won it by a margin of just over one million.

Gibraltar and Newcastle were the first two results in just before midnight for Remain which gave the Stay campaign hope that a victory could be won.

Huge swathes of London, Northern Ireland and all 32 areas of Scotland voted the same way.

But this polling map shows it's Middle England and the North that swung it for the Leave campaign with areas including Boston and Thurrock seeing nearly three quarters of people voting to exit the EU.

This graph from the Financial Times illustrates just how divided Britain was on the EU issue...

FT graphic showing just how divided we are pic.twitter.com/JUswOl08Xu

Stock markets were sent tumbling around the world and the pound plunged to its lowest level since 1985 on the back of the news.

UKIP leader Nigel Farage, who was one of the figureheads of the Leave campaign, was feeling pretty happy with himself this morning...

We've got our country back. Thanks to all of you. #IndependenceDay

We have done it! #IndependenceDayhttps://t.co/C96aoqlnpM

Many supporters of Brexit were equally overjoyed with the seismic result of the referendum...

#Brexit so exciting 🎉🎉🎉 the UK leads it doesn't follow it 🇬🇧

But there were some pretty grim reactions to the news from the other half of Britain...

"Britain is a tolerant and progressive country" - you can throw that in the bin.

Nigel Farage, Neil Hamilton, Boris Johnson. These people convinced us. They really did. You're not dreaming. #Brexit #EuroRef

Thanks Britain for bringing chaos to Europe. Much obliged. Hope the EU takes the appropriate actions #Brexit #Consequences #visasforbrits

Evidence is piling up just hours after the result that we've just nuked ourselves with Brexit, as Remain tried to warn everyone. #EUref

If the UK was a ship, half the crew just hacked a huge hole in the hull with pick axes & just said not to worry, it might not sink #Euref

It's the end of Europe as we know it. #brexit

Well, this was prophetic #Brexit pic.twitter.com/Xp1y5taitz

Yet some people tried to remain upbeat about Britain leaving the EU...