One of the world's best investigative publishers runs out of a house in Leicester. After the birth of his first child, Eliot Higgins no longer had the time to play World of Warcraft, or for any other hobby. He started blogging as a flexible and engaging past time, implementing the problem-solving skills developed by gaming.

The end result is Bellingcat, a website publishing investigative journalism based on open source information and fact checking. Higgins and his team revealed the identities of the two Russian intelligence officers responsible for poisoning Sergei and Yulia Skripal in Salisbury. They also exposed the use of cluster bombs in Syria and, now, those who shot down passenger flight MH-17 over Ukraine. 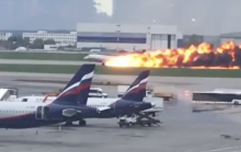 END_OF_DOCUMENT_TOKEN_TO_BE_REPLACED

Higgins is gaining traction embarrassing the Russian government. He even forced the country's ministry of defence to retract a press release, after showing imagery it said was irrefutable evidence of American collaboration with ISIS to be lifted from a computer game.

Is he worried about a couple of Russian tourists turning up in Leicester to check out the cathedral spire? How far is Putin prepared to go to impede justice for the families of the 298 people murdered on MH-17? Eliot Higgins answers those questions in an exclusive interview with JOE.co.uk.

You may also like
Politics
Is Dominic Cummings' Russia link a danger to Britain?
Entertainment
Russia is remaking Chernobyl with the Americans as the bad guys
News
At least 41 killed in Russian plane crash
Sport
Branislav Ivanovic left terrified by flares during Zenit's title celebrations
News
In full: Mueller report into Trump, Russia and 2016 election
Next Page