The group blocked the entrance to one of the fast food chain's distribution centres.

Eight animal rights activists have been charged with aggravated trespass after using vehicles and bamboo structures to blockade a McDonalds distribution centre in Basingstoke on Saturday.

END_OF_DOCUMENT_TOKEN_TO_BE_REPLACED

The group wanted the fast food giants to commit to becoming fully plant-based as early as 2025 in order to combat the climate crisis and to protect animal welfare.

The Metro reports that Jennifer D’Netto, 51, of Malvern Wells, Worcestershire; Kiera Ilett-Jones, 24, from Beckenham, Kent; and Elizabeth Flynn, 32, Rose Patterson, 31, and Adam Haigh, 21, all of no fixed address, have been released on conditional bail to appear at Basingstoke Magistrates’ Court on June 8. Sidney Davies, 21, from Bristol, and Bethany Croakin, 25, and Jasmine Maslen, 18, both of no fixed address have also been bailed to appear at the same court on June 10.

All eight of them were charged with aggravated trespass as well as "watching or besetting a house or place to compel the abstention or doing of a lawful act." 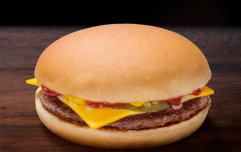 END_OF_DOCUMENT_TOKEN_TO_BE_REPLACED

Chief inspector Matt Reeves said: ‘Everyone has the right to free speech and protest, however, officers will take necessary action against the few who deliberately choose to act outside the law.’

Animal Rebellion spokesman James Ozden said protests at Coventry and Heywood ended voluntarily at 10am and 4am on Sunday, respectively. The protest at Hemel Hempstead was cleared by police at around 3am while the Basingstoke demonstration ended at about 2am.

According to Ozden, around 100 people took part in the protest and the action apparently disrupted an estimated 1,900 lorries. He said that the action was aimed at criticising the animal agriculture industry for its role in the global climate crisis.

popular
Landlord faces £40k fine after tenant puts swimming pool on roof of flats
Graeme Souness under fire for calling football a ‘man’s game' while sat with Karen Carney
Jeremy Kyle's security guard Big Steve is now on Drag Race
Incredible case of the only known individual whose parents were two different species
Comedian cancelled after ‘getting his penis out on stage’ during Edinburgh Fringe Festival
Man with laughing condition like The Joker accused Joaquin Phoenix of stealing his persona
Man 19 years older than his wife shocked to learn he had met her when she was a baby
You may also like
Life
Man prompts furious reaction after proposing to his girlfriend... in McDonald's
Food
Backpacker fined $2,664 for taking McDonald’s from Bali to Australia, breaking biosecurity laws
Food
McDonald's restaurant bans all under-18s from entering after 5pm following string of abuse aimed at staff
Food
Former McDonald's employee reveals why you shouldn't have the fries or milkshakes
News
Woman climbs into McDonald’s drive-thru to cook her own order after staff refuse to take order
Next Page