Manchester City goalkeeper Ederson has insisted he did not know who Tommy Robinson was when he posed for a photo with the far right figure. 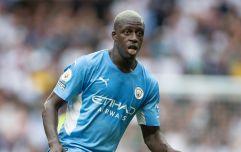 END_OF_DOCUMENT_TOKEN_TO_BE_REPLACED

Robinson, whose real name is Stephen Yaxley-Lennon, is the co-founder of the English Defence League (EDL) and campaigning to become an MEP in the European elections.

The Brazilian international said he did not know who Robinson was when he was asked for a picture and has since distanced himself, denying he supports the former BNP member or his ideas.

In response Ederson tweeted: "People have made me aware of who this guy is. I definitely not support this guy or his ideas.