PlayStation 4 and Xbox One users are able to download the next-gen version of FIFA 21 a day before the official release date, gaining access to improved graphics and loading times.

END_OF_DOCUMENT_TOKEN_TO_BE_REPLACED

Release was scheduled for December 4 but EA announced that players of the current console generation would be able to download the game today with worldwide rollout to follow.

Other features of the new game include a new gameplay camera, an improved player interaction system as well as subtle but impressive improvements to gameplay particularly in one-on-one battles, as mentioned in JOE's review.

Haptic feedback on the PS5 controller will also allow gamers to feel a tightening of controls to represent the fatigue of their players.

The next-gen version of the game, for PlayStation 5 and and Xbox Series X consoles is not available until December 4. 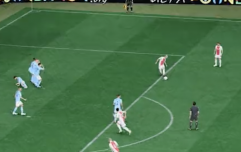 END_OF_DOCUMENT_TOKEN_TO_BE_REPLACED

A class action lawsuit was last month filed against EA Sports in the US District Court of Northern California by Jason Zajonc, Danyael Williams, and Pranko Lozano.

In a statement responding to the lawsuit, EA said: "We believe the claims are baseless and misrepresent our games, and we will defend."

The lawsuit is just the latest controversy that EA have become embroiled in regarding their controversial loot boxes in FUT, which critics have described as being akin to a slot machine, and at times addictive for gamers.

popular
Multiple fatalities after planes collide mid-air over airport
Gerard Butler breaks silence after death of 'brother in arms' Darius Danesh
UK city named the 'most dangerous' in Europe, according to study
Incredible case of the only known individual whose parents were two different species
Mum cuts off boyfriend's 'private parts' after he 'tried to rape 14-year-old daughter'
Man gets full sized Stella tattoo on his head because he loves the drink that much
Rachel Bilson says Bill Hader's 'big d***' is the thing she misses most about him
You may also like
Gaming
NASA-style food pouches developed for gamers to give them essential nutrients
Life
Gamer sells PC to pay for mum's cancer treatment
Entertainment
GTA VI reportedly features first female protagonist and is based on a modern day Bonnie & Clyde
Sport
FIFA 23 fans in India able to buy the game for $0.06 after 'pricing error'
Entertainment
Game where you run around as a stray cat has become the highest-rated release of 2022
Next Page