Donald Trump refuses to promise he will leave office peacefully

Donald Trump declined to commit to a peaceful transfer of power if he loses the 2020 election during a press conference on Wednesday.

Suggesting he might not accept the result if not declared winner in November, Trump said "we'll see" when asked by a reporter about peacefully leaving office.

The foreboding remarks coincide with riots that have raged across America for months. More worryingly, a group of senior American politicians from both the Democrat and Republican parties, called the Transition Integrity Project, have war-gamed all possible electoral outcomes.

Every single one, other than a clear Trump victory, results in civil war.

Trump said: "We're going to have to see what happens. You know that. I've been complaining very strongly about the ballots. And the ballots are a disaster. 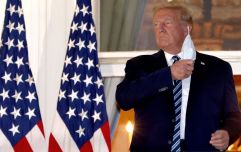 Donald Trump storms out of interview due to 'tough questions'

END_OF_DOCUMENT_TOKEN_TO_BE_REPLACED

The president's concerns about "ballots" are references to an unsubstantiated claim that fraud is widespread among postal voting.

If he were to lose and refuse to leave office, summoning to him the paramilitary groups that he has encouraged and promoted across the country, arms of the US government would be required to remove him from the White House. Specifically the army - the 82nd Airborne Division based in North Carolina.

Due to an expected high percentage of mail-in ballots at this year's election, it's unlikely a winner will be surely known on the night and instead days later, when postal have been counted.

And all this goes on as the Supreme Court is swamped by selection controversy. The court would be responsible for arbitrating disputed election results and, following the recent death of Ruth Bader Ginsburg, could now be loaded with a pro-Trump conservative majority.

With Trump still heavily trailing Biden in the polls, it's possible we are entering the violent end game of his presidency.

popular
Tunnel footage shows Karim Benzema slagging off Real Madrid teammate
Danny Dyer rages that the people who went to Eton "can't run this country"
QUIZ: Can you identify these world cities on a map?
Bodyguards hired to protect Jordan Pickford after death threats
Extinction Rebellion confront David Attenborough at his home after he criticised the group
QUIZ: How well do you remember the football references in Peep Show?
Everything your football boots say about you as a player