“Somebody's got to do something about Antifa and the left"

Donald Trump passed up on the opportunity to condemn white supremacists and militia groups during the first US presidential debate on Tuesday night, instead urging a well-known far right organisation “to stand back and stand by” and saying “somebody's got to do something about ANTIFA and the left". 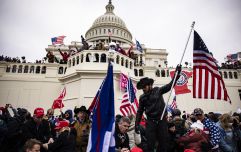 END_OF_DOCUMENT_TOKEN_TO_BE_REPLACED

In a debate that frequently turned ugly and in which Trump was accused of “an avalanche of lying” in a CNN fact check of events, one of the most notable moments was when the role of white supremacist and militia groups in violence seen in cities across the United States was raised with the current president.

Asked by moderator Chris Wallace if he was willing to condemn these groups and to say that they need to stand down and not add to the violence, Trump said “sure, I’m willing to do that”.

He then directly addressed the far-right Proud Boys organisation and turned his attention to the role of left-wing groups in civil unrest in the US.

“I would say almost everything I see is from the left wing, not from the right wing” Trump said.

“I’m willing to do anything… I want to see peace."

Challenged by Wallace and Joe Biden to condemn right-wing extremist groups. Trump said: “Give me a name, who would you like me to condemn?”

TRUMP: "Proud Boys, stand back and stand by! But I'll tell you what, somebody's got to do something about ANTIFA and the left"pic.twitter.com/QRXLlR60m2

END_OF_DOCUMENT_TOKEN_TO_BE_REPLACED

When Biden replied “Proud Boys”, Trump responded: “Proud boys, stand back and stand by… but I’ll tell you what, somebody's got to do something about Antifa and the left because this is not a right-wing problem, this is a left-wing…"

Biden then intervened to clarify that Antifa is an ideology, not an organisation, something pointed out by FBI director Christopher Wray before a Homeland Security Committee earlier this month.

In response to Trump’s reference to Proud Boys, Jonathan Greenblatt, CEO of the Anti-Defamation League (ADL), tweeted that the president "owes America an apology or an explanation. Now."

It's astonishing that, when asked a simple question, will you condemn white supremacists, @POTUS responded - "The Proud Boys should stand back and stand by." Trying to determine if this was an answer or an admission. @POTUS owes America an apology or an explanation. Now. https://t.co/9tgufXom9K

The Anti-Defamation League classifies Proud Boys as an extremist group with a misogynistic, Islamophobic, transphobic and anti-immigrant ideology.

popular
A definitive ranking of every swear word from worst to best
Here's how to see who's been taking screenshots of your Instagram Stories
The definitive ranking all 151 original Pokémon from worst to best
Find out where you rank in the world for penis size
Sir Terry Pratchett’s daughter shuts down ‘horrifying’ idea that her father would've been transphobic
Gary Neville points out the obvious about Digby, Lord Jones
Johnny Depp secures rare win over Amber Heard’s $7m divorce settlement pledge
You may also like
Entertainment
Megan Fox clarifies comments after 'calling Donald Trump a legend'
News
Trump reportedly to sue Facebook and Twitter CEOs for everyone 'cancelled' by social media
Crime
Trump Organization and CFO will be criminally charged, according to reports
Politics
Osama Bin-Laden's niece gatecrashes Biden-Putin meeting with 'Trump Won' flag
Politics
Difference between Donald Trump and Joe Biden encapsulated in one five second video
Next Page