'Did he just throw that?'

Michael Chiesa is no stranger to hyping up his UFC fights - he famously took a run at Kevin Lee during a press conference over 'your mum' insults last year - but even he was stunned by the attack on a bus carrying him and several MMA stars on Thursday.

Chiesa was on-board a bus of red corner fighters, including Khabib Nurmagomedov, Al Iaquinta, Karolina Kowalkiewicz, Ray Borg and Rose Namajunas, that came under fire from projectiles launched by Conor McGregor and several of his colleagues.

Chiesa was sitting right beside a window that was smashed when McGregor [caught on several cameras] tossed a hand trolley through it. Namajunas was sitting a row further back and Borg was also in the vicinity. Incredibly, Chiesa kept hold of his tooth-pick the whole time. 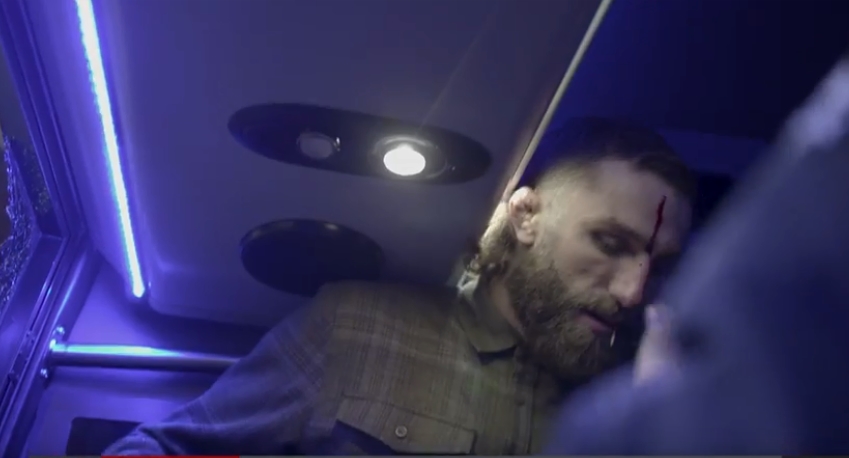 UFC president Dana White says Chiesa was struck by glass after that window smash and that glass particles also damaged the cornea of flyweight fighter Borg.

Both men have since been pulled from the fight card.

A decision was made by the New York State Athletic Commission to pull me from UFC 223. I’m devastated to say the least. @Showtimepettis I hope to run this match up ASAP, June 9th in your backyard. That’s all I have to say for now. Much love.

END_OF_DOCUMENT_TOKEN_TO_BE_REPLACED

The bus reversed into an exit gate and had security shutters lowered while McGregor and his crew were prevented from accessing, before they made off.

One of the more disturbing images from the footage captured aboard the fighters' bus must be that of a distraught Kowalkiewicz and Namajunas, her hood up, clearly shook by the incident. She tells those around her that she is okay as she looks down at the shattered glass around her feet.

Another bus was arranged to get the fighters back to their hotels but Namajunas and her trainer, and partner, Pat Barry opted to steer well clear and walk. White visited her later that day to check on her.

There were legitimate fears, for several hours on Thursday, that events had shaken Namajunas so much that she would not be in a fit state to defend her straw-weight title against former champion Joanna Jedrzejczyk. After some reflection, she later told officials she would indeed defend her belt.

White was in touch, by text, with McGregor after the incident but 'The Notorious' also sent out messages to some that were caught up in the fiasco.

The UFC president also revealed McGregor had reached out to both Chiesa and Namajunas, and their people, to apologise. It is not clear whether either fighter responded to him.

McGregor and Cian Cowley, who was also involved in the attack and appeared in court on Friday, were both instructed that there would be no more contact with Chiesa allowed - as part of their bail terms - before they return to court on June 14.

As for Namajunas, she weighed in at the Barclays Center, scene of the attack, on Friday evening for the ceremonial weigh ins. UFC commentator Joe Rogan did not ask her about Thursday's goings on and focused on her fight preparation. She said:

"I'm super blessed to be here, despite everything that has gone on this week.

"I'm just grateful for another chance to face my fears and to prove to myself that I'm the best in the world. When I do my best, I am my best."

'Thug Rose' was asked about the UFC potentially stripping McGregor of his lightweight belt, back in February, and said she was in favour of it as the Dubliner had not set a return date to the promotion. "I don't think it would really hurt his career at all if they did that [stripped him]," she told UFC on FOX.

popular
Deep fake meme lads sing sea shanty that will make you want to abandon your childhood sweetheart and circumnavigate the globe
The 12 unbreakable rules of the Full English breakfast
The JOE Friday Pub Quiz: Week 226
QUIZ: Identify which of these 50 players played with Wayne Rooney
Pimlico Plumbers boss announces 'no vaccine, no job' policy
The hardest Marvel Cinematic Universe quiz you will ever take
QUIZ: How well do you know Cool Runnings?
You may also like
Fitness & Health
Conor McGregor's new workout regime and daily diet ahead of UFC return
MMA
'Winner of Dustin and Conor will fight for my belt' - Khabib Nurmagomedov
Sport
Jake Paul calls out Conor McGregor in nasty video
Sport
Boxer Ryan Garcia bets $100,000 on Conor McGregor not being able to knock out Jake Paul
Sport
Conor McGregor pays tribute as Khabib retirement blows division wide open
Next Page