"Seeing [Mr Kim] become emaciated like that, we all became so sad." 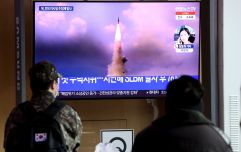 END_OF_DOCUMENT_TOKEN_TO_BE_REPLACED

Discussions and comments on the leader's health and appearance is usually banned, with his image being strictly controlled by state media in the country.

However footage aired North Korea's main channel appears to show the leader looking much thinner than in recent years, and rumours continue to swirl about his health.

The BBC reports that viewers of Korea Central Television saw a clip of Kim Jong-Un arriving at a concert having appeared to have lost a lot of weight. The channel then aired a clip of a Pyongyang citizen telling the channel about his upset at seeing Jong-un look so thin.

The man said: "Seeing [Mr Kim] become emaciated like that, we all became so sad.

"Everyone just started to cry."

However it would seem that the weight loss is very much of Jong-un's own doing, and the North Korean despot seems to be going on something of a health kick.

One Korea Center is a website specialising in North Korean affairs. The head of the site, Lwak Gil Seob, told the BBC how the footage must have been aired to show that "Kim Jong-un is losing weight by himself" because the regime there "would never allow negative news around Kim Jong-un to be published."

Jong-un has never been the picture of health to be fair, and maybe he's realised that he may need to shed some pounds if he wants to make sure his reign continues for a while yet. He is thought to be a heavy smoker and drinker, and is apparently just 37.

He has disappeared from the public eye for long periods before, with the South Korean government stating that these disappearances have been as he recovers from medical procedures.

The most recent of these disappearances was in 2020, when he went 20 days without being seen in public, leading to speculation that he had undergone heart surgery or even died.