Center Parcs has announced it will no longer be advertising in the Daily Mail.

The decision was made after an article by columnist Richard Littlejohn, which appeared to criticise Olympic diver Tom Daley and his husband Dustin Lance Black.

The couple announced on Valentine's Day that they are expecting their first child together. In response to this, Littlejohn claimed in the article, which appeared online, that children 'benefit most from being raised by a man and a woman'.

1/2 We take where we advertise very seriously and have a number of steps to prevent our advertising from appearing alongside inappropriate content. We felt this placement was completely unacceptable and therefore ceased advertising with the Daily Mail with immediate effect.


2/2 We apologise for any offence this may have caused. Clare 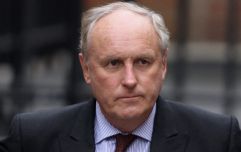 END_OF_DOCUMENT_TOKEN_TO_BE_REPLACED

Littlejohn had written in the same article that he supported civil partnerships, explaining he would prefer a child to be fostered by gay couples rather than be 'condemned to rot' in state-run institutions.

He continued: 'That said, and despite the fact that countless single parents do a fantastic job, I still cling to the belief that children benefit most from being brought up by a man and a woman.'

popular
People who refuse COVID vaccine could be banned from football matches and the cinema
Moderna vaccine trial shows 100% efficacy in dealing with severe Covid-19 infections
Troy Deeney criticised for comments on David Luiz's collision with Raul Jimenez
Joan Laporta wants to use 'You'll Never Walk Alone' as La Masia slogan
QUIZ: How well do you remember the Gavin and Stacey Christmas special?
FA to investigate Edinson Cavani's deleted Instagram post
QUIZ: Fill in the missing club from these players' career paths - Part 6
You may also like
Sport
Marcus Rashford responds to Daily Mail article about his property investment
Sport
Raheem Sterling takes aim at the Daily Mail in Instagram post
Music
Aloe Blacc calls out Daily Mail Group for its "lack of diversity"
Sport
Hector Bellerin calls out Daily Mail article for telling lies about him
Entertainment
Why are Kate Middleton's fingers all the same length: an investigation
Next Page