The Prime Minister and his wife Carrie Johnson on Thursday announced the birth of their second child, a baby girl. 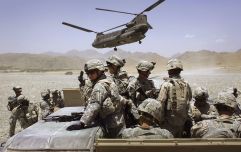 END_OF_DOCUMENT_TOKEN_TO_BE_REPLACED

In a statement, a spokeswoman for the couple said: "The Prime Minister and Mrs Johnson are delighted to announce the birth of a healthy baby girl at a London hospital earlier today.

"Both mother and daughter are doing very well. The couple would like to thank the brilliant NHS maternity team for all their care and support."

Carrie Johnson announced she was pregnant with their second child in July, revealing that she had earlier had a miscarriage. She said she felt "incredibly blessed" to be pregnant again.

The latest arrival is the seventh for Johnson.

He has four children with ex-wife Marina Wheeler, a child born in 2009 as a result of an affair with art consultant Helen Macintyre, and now two children with his current wife.

popular
Moment thug kidnaps teenage ex in horrifying ordeal that left her unable to walk or talk
Coronation Street star left homeless after sharing anti-vax views
Cristiano Ronaldo complained to Transfermarkt about valuation before blocking them
Boris Johnson outdoes himself with the most ridiculous denial he's ever made
Why dogs are getting sick and symptoms owners should look out for
Martin Lewis issues urgent advice for households ahead of energy price hike
Dr. Dre shares unbelievable video of Eminem's skills to prove no rapper could beat him
You may also like
News
Five False claims made by Boris Johnson during Prime Minister's Questions
Politics
62% of Brits think Johnson should resign as PM, YouGov poll finds
News
Britain will send troops 'to defend Europe' if Putin invades Ukraine, says PM
News
Boris Johnson's praise for 7-year-old who cancelled birthday party comes back to bite him
News
Met probe could be good news for PM as Sue Gray report delayed
Next Page