Boris actually compared Ukraine's fight for freedom to the Brexit vote - no, seriously

Boris Johnson has compared the ongoing war in Ukraine and its people's fight for freedom to British people voting for Brexit and resisting 'wokeness' in a speech delivered at the Conservative Spring Conference in Blackpool.

END_OF_DOCUMENT_TOKEN_TO_BE_REPLACED

Ukraine's ambassador to the UK, Vadym Prystaiko, was in the audience while Johnson delivered his remarks, having received a standing ovation upon his arrival earlier in the day.

"I know that it's the instinct of the people of this country, like the people of Ukraine, to choose freedom every time," he said during his speech, as reported by The Mirror.

"I can give you a couple of famous recent examples. When the British people voted for Brexit in such large numbers, I don't believe it was that they were remotely hostile to foreigners.

"It's because they wanted to be free to do things differently and for this country to be able to run itself."

END_OF_DOCUMENT_TOKEN_TO_BE_REPLACED

Bringing covid into the conversation, Johnson continued to illustrate his point by citing British people's willingness to come forward for vaccinations and boosters shots during the pandemic.

"It was because they wanted to get on with their lives. They were fed up with being told what to do."

The PM then made reference to 'wokeness' whilst discussing the reasons why Ukrainian's are fleeing their country for refuge in the UK.

"It is the invincible strength of this country... that we believe by and large and within the law that people should be able to do whatever they want providing they don't do harm to anyone else - and that's called freedom. 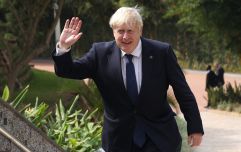 END_OF_DOCUMENT_TOKEN_TO_BE_REPLACED

"We don't need to be woke. We just want to be free, and that's why talented people are fleeing Russia quite frankly right now. That's why they're flocking to the UK.

"That's Putin's tragedy. There's a sense in which his disastrous error in Ukraine is itself an argument for democracy and freedom.

"Seriously, if Putin had a free press - if he had the BBC on his case - he would have known the truth. Or a version of it."

Johnson suggested that President Putin was in an "echo chamber of sycophants" before making light of his writings about the history of the Russian people - something he has tried to use to justify his invasion in Ukraine.

According to The Mirror's reports, Johnson called Putin's writing "semi-mythical guff" and "Nostradamus meets Russian Wikipedia", instead purporting that Russia was afraid of Ukraine because of its "free press" and "free elections."

Elsewhere, the PM warned about the dangers of "normalising" relations with the Russian president after the invasion of Ukraine, citing such actions may lead to intimidation from the Baltic to the Black Sea.

"I know there are some around the world, even in some western governments… who say that we’re better off making accommodations with tyranny," explained Johnson, as per The Guardian.

"I believe they are profoundly wrong and to try to renormalise relations with Putin after this, as we did in 2014, would be to make exactly the same mistake.”

popular
Travis Barker’s daughter shares picture of Blink-182 star in hospital bed - tells fans to ‘send your prayers’
Bette Midler wants the US to ban Viagra because it’s ‘God’s will’ to have a ‘limp d**k’
July heatwave: When to expect hot weather and how long it will last
Fans shocked after Machine Gun Kelly smashes glass on his face during performance
British teen says she was raped in Majorca hotel by 'famous actor and musician'
Police hunt for two 'laughing' men who kissed three-year-old girl in front of distressed mum
Father takes his own life after 18-month-old found dead in hot car
You may also like
News
Former Tory leader Michael Howard calls on Boris Johnson to resign
News
Boris Johnson says he will 'keep going' after historic byelection defeats
News
Tory party chairman Oliver Dowden resigns after double by-election loss
News
'Reckless' to give pay rises to nurses and teachers, says Downing Street
News
Lib Dems delete tweet about RMT strikes after wildly misreading the room
Next Page