The annual bonfire in Derry drew a crowd of thousands

Thousands of people descended on the Bogside for its annual bonfire on August 15.

Typically the fire commemorates a religious festival for the Catholic community but had additional significance this year, the 50th anniversary of a popular rebellion against sectarian policing - the Battle of the Bogside - and the upcoming trial of 'Soldier F.'

'F' was a paratrooper in the British Army and is charged with murdering two unarmed civilians on Bloody Sunday.

The controversial Bogside bonfire this afternoon. The fire will be lit tonight after 9pm. There’s a lively Feile family fun day taking place just yards from this site #Derry. pic.twitter.com/NJWF0XJhh7 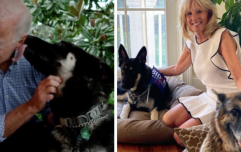 END_OF_DOCUMENT_TOKEN_TO_BE_REPLACED

The Bogside bonfire was mainly constructed out of pallets by local young people but on the day professional signs materialised on the site reading "Free Derry says no to state terrorism" and bearing the Parachute Regiment emblem. Another carried the simple slogan "Fuck Soldier F."

JOE spoke to attendees about the day's symbolism, celebrations and significance to the Bogside, who explained the reasoning behind their tradition.

“They burn our flags we burn theirs.”

popular
Furious Romelu Lukaku held back after clashing with Zlatan Ibrahimovic
A definitive ranking of every swear word from worst to best
Odion Ighalo bids emotional farewell to Manchester United
Here's how to see who's been taking screenshots of your Instagram Stories
Boris Johnson refuses to give NHS and social care staff a £500 Covid bonus
Frank Lampard 'went months' without talking to players at Chelsea
The definitive ranking all 151 original Pokémon from worst to best
You may also like
News
Pubs and restaurants could stay closed until mid July after government extends lockdown powers
News
UK still "long, long, long way off" lifting lockdown restrictions, Matt Hancock says
News
Doctors call for gap between Pfizer vaccine doses to be reduced
Life
Make your own Bernie Sanders meme in any location with this website
News
Bernie Sanders memes spread like wildfire after Joe Biden inauguration
Next Page