A 14-year-old cricketer has been killed after being struck with a stump during a game in Bangladesh.

According to the Daily Mail, Faisal Hossain sustained horrific neck injuries when an angry batsman hurled a stump into the air. The stump hit Faisal and, despite efforts to save him, he later died of his injuries. 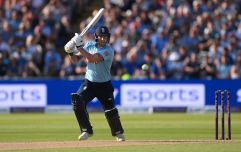 END_OF_DOCUMENT_TOKEN_TO_BE_REPLACED

Local police in Chittagong, have explained that the incident occurred when the batsman was given out during a friendly game between two neighbourhood teams.

"The batsman was furious when he saw that he was stumped or bowled out," said assistant police commissioner, Jahangir Alam.

"He grabbed a stump and threw it in the air. The stump hit part of the neck and head of Faisal who was fielding close to the wicket.

"He collapsed on the ground in pain and was declared dead after he was taken to a hospital."

The report from the Mail reveals very little about the man responsible, although it does add that police have confirmed that he us to be prosecuted for causing unintentional death.