Ainsley Harriott has reportedly helped save a woman from drowning at the Chelsea Flower Show.

The TV chef is said to have sprung to action after spotting the guest trip and fall into a water feature.

TV presenter and chef Ainsley Harriott was among a group of celebrities who rushed to help a woman who had fallen into a pond at the Chelsea Flower Show opening day https://t.co/MRhVdgk0Nh

One onlooker quoted by Metro said: "The garden was packed with lots of people and I think the woman must have fallen into the pond or tripped over and ended up in the water. 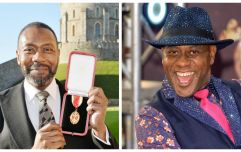 END_OF_DOCUMENT_TOKEN_TO_BE_REPLACED

"I think she nearly drowned. She was pulled out by Ainsley Harriott and some other celebrities before they laid her down on the floor. She was coughing up lots of water."

Celebrities and members of the royal family were getting a preview of the show at the Royal Horticultural Society's showpiece event on Monday when the incident happened.

Eye-witnesses said that the woman fell into the pond that is part of the BBC Studios "Our Green Planet and RHS Bee Garden" and that Harriott "pulled her out", The Telegraph reported.

Matt Peskett, an RHS volunteer who saw the accident, told the newspaper: "There were 30 or 40 celebs out and they were all drinking champagne. And then all of a sudden one of the guests stepped backwards and fell in.

"They fully fell in, not just a foot."

Another witness told the Telegraph that they thought the woman "nearly downed" and that she was "coughing up lots of water" after Harriott and other celebrities pulled her to safety.