A lake of actual water has been discovered on Mars

This is a momentous discovery

For as long as anyone can remember, Mars was the planet that scientists, astronomers and stargazers looked to and wondered 'is there life out there?'. Scientists in the past have discovered ice on the planet, pointing to the logical conclusion that life could, if not did, exist there. 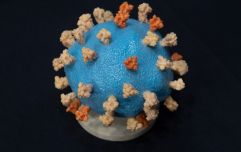 END_OF_DOCUMENT_TOKEN_TO_BE_REPLACED

And today it has been announced that scientists have discovered large pools of liquid underneath the planet's polar ice caps.

The discovery was published the highly-respected scientific journal Science, and followed research carried out by the Rome-based National Institute of Astrophysics (INAF) which found a large reservoir of water under the south pole of the planet.

The publication states that the find is so large that it resembles subglacial lakes on Earth.

"This is potentially the first habitat we know of on Mars. It’s the first place where microorganisms like those that exist today on Earth could survive," said Dr. Roberto Orosei of the INAF to IFL Science.

Evidence was gathered a radar on the European Space Agency's Mars Express spacecraft. The radar, known as the MARSIS (Mars Advanced Radar for Subsurface and Ionosphere Sounding instrument) sent radar pulses through the planet's polar ice caps and measured how the waves behaved when being reflected back.

What they discovered was similar to ice sheets found in the Antarctic, with its brightness demonstrating that they had discovered water.