48 hours 'grizzing it' with the Royal Marines

A whale’s spout breaks the Arabian sea in front of HMS Albion, the Royal Navy flagship cruising off the coast of Oman at 18 knots. The deck protrudes beyond its Phalanx defence system, a fully automatic weapon which uses radar to lock onto incoming missiles and aircraft before obliterating them with explosive rounds the size of your wrist, fired by the thousand every minute. 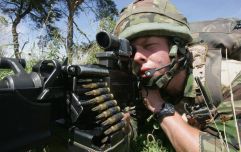 END_OF_DOCUMENT_TOKEN_TO_BE_REPLACED

I ask the officer accompanying us what offensive weaponry the ship possesses. His answer is curt.

The Royal Marines are in Oman for a joint training exercise between the two nations called Saif Sareea 3. It is Britain’s biggest military deployment in the Gulf since the Iraq war - involving 5,500 personnel, 18 Challenger 2 tanks, two Apache gunships, eight Typhoon jets and more. Few of which can swim, or launch a shock amphibious assault, better than the marines. 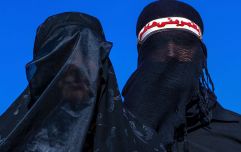 END_OF_DOCUMENT_TOKEN_TO_BE_REPLACED

A single landing craft utility can carry a company of them (about 120) or one of the Challenger 2 battle tanks. Albion has four. They do not look dissimilar to the landing barges of D-Day immortalised by Saving Private Ryan, and their functionality isn’t too different either. Ramp at the front, soldiers in the back. Floating platforms in the ocean. Marines can live off them for days at a time, fishing off the side and using its deployment ramp as a staircase into the large swimming pool that is the Arabian sea. But not tonight.

Like a Russian doll the marines unfurl from the sea to land, starting out by the hundred on ships like Albion, which sits just behind the 10-mile-or-so horizon line as seen from shore, then travelling a few miles on a landing craft utility before finally being shuttled six-at-a-time on inflatable dinghies to Blue Beach.

The Arabian sea extends from the hold of RFA Lyme Bay 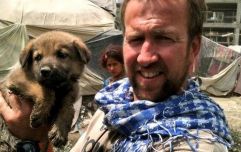 Pen Farthing given go-ahead to evacuate Afghanistan with rescue animals

END_OF_DOCUMENT_TOKEN_TO_BE_REPLACED

Oman's fledgling tourism industry trades on white sand beaches. Blue Beach is not one of them.

It is a tiny little rocky inlet, which is why it has been chosen as the assault's landing point. Marine divers swam to it in the previous week and mapped its approaches with sonar. Through these channels a coxswain navigates in, guiding our little inflatable boat as close to shore as possible using only an outboard motor.

Like surfers they wait beyond the break zone, pick a wave and ride it in. Boulders the size of bass drums litter the floor, there is no exposed sand, and will puncture and deflate a wayward dinghy. Waiting on the landing craft utility for our rubber taxi, word comes back that one has capsized.

Because of the rocks it's impossible to make landfall. I pay the marines a bribe to get us as close as possible - British chocolate. Albion last restocked its supplies in Japan two months ago and, I don't know if you've ever sampled the country's snacking fare but fuck me, it is not Cadbury's.

So we're dropped off 20 metres out, waist deep, and wade in. It is slippy underfoot and traversed like a Lloyds' dance floor before the spilled Jäger has gone sticky. We make it out, managing to keep our camera equipment dry, and trek up a sharp cliff face with the light of a full moon as our guide. The walk is done in total silence save for the squelching of boots full of water. We reach a depression in the ground, concealing the company from heat-detection equipment, and wait.

The Royal Marines of Bravo company wait at the clifftop, viewed through night vision

This whole process has been planned, co-ordinated and implemented from Albion. Beneath the ship's bridge, one of the largest in the Navy and big enough to accommodate a cricket wicket, is the command planning room. After the assault, a shower and a nap, we visited it and captain Hugo Grant, amphibious operations officer for 3 commando brigade headquarters. "My role here is where we put our personnel, where we put our vehicles and where we're going to go ashore like you did last night. You were in the craft, we were all sat back here planning it." Which was funny at the time, after soap and sleep had restored sense of humour.

But back to the clifftop where, with one hour's rest in the last 36, a coastal wind is whipping over its edge and, because Oman is, you know, in the Middle East and the temperature floats around 40C, I have not brought a jacket. My boots are essentially buckets full of sea water. I sit in the foetal position shivering, hugging myself, still in silence save for the occasional sound of marine piss hitting the sand. One of them gives our camerawoman a jacket.

Captain Hugo Grant talks us through the assault

After three hours that felt like three weeks we get up off the stones and walk a couple of kilometres to the gun line. From here, Bravo company are providing heavy suppressive fire with javelin missiles and light machine guns. Alpha company have marched a six kilometre dogleg around us to attack the same enemy positions. The concentrated firepower from our position affords them, and the Omanis alongside, the freedom to manoeuvre.

A Javelin missile is fired by a soldier from 1 Mercian during Exercise Saif Sareea 3 in Oman (Credit: MOD)

This is a training exercise so the soldiers are using blanks. Marshalls prowl between them screaming "YOU'RE DEAD, SNIPER, DEAD." The three machine gun positions at the fulcrum of the line are manned by two specially trained operators each. As soon as they arrive and begin firing a booming resonates from the enemy position. A man in a high-vis strolls over to say that, unbeknownst to them, a mortar has killed them all.

I ask our handler how likely such a direct hit would be, straight off, in a real combat situation. "That would be the luckiest fucking mortar in the world." Still, rules is rules. Marines run to their colleagues and haul them out of the firing line and away for casualty evacuation by Chinook helicopter which, conveniently, is also going to ferry us home.

Marines wait for a Chinook to collect them (Credit: MOD)

Looming in the background its rotor thuds. Those around us finish bitching about that mortar and their second or third cigarette. We get up to leave, approaching the helicopter from its rear at an angle so as to avoid the front blade which, if landed on rough terrain, comes low enough to cleanly slice through your jugular, traps and indeed whole spine.

An arsey RAF officer promptly refuses us entry without the appropriate headwear - a standard issue combat helmet which we'd left on the ship. Something about health and safety and an important organ being situated in our skulls.

Back on Albion the commanding officer of 40 commando, lieutenant colonel Paul Maynard, talked about the mission's importance. "The Royal Marines fought alongside the Sultan's forces in the Dhofar campaign, one of my predecessors personally fought in that campaign. There's a brotherhood that flows from that fighting, the loss of life, and it is never lost." He didn't explain why I had to go two days for a shower and a sleep but he did invite us out to winter drills in Norway next year. I'm sure we won't need to pack a jacket for that either.

Done with the marines we catch another helicopter flight, in a Wildcat, back to the mainland. To WiFi, the creature comforts they go without for weeks on end at a time. An officer tells me he actually relishes those weeks. "I don't want to work a desk job in the city like my friends. I want to be out here soldiering, grizzing it. The communal suffering brings you closer together."