He'd had an argument with his parents

An unnamed child eloped to Indonesia after he had an argument with parents. 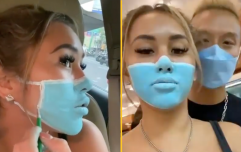 END_OF_DOCUMENT_TOKEN_TO_BE_REPLACED

Booking a flight using his mum's credit card, after doing extensive research for an airline that would permit him to fly solo, the enterprising boy then tricked his nan into handing over his passport.

By the time he was reported missing he was already in the four star All Seasons Hotel, 9News reports.

This is his mum (Credit: NINE)

He managed to find a "cheap deal" and flew on a school day, naturally.

Scootering to his local train station, the kid then caught a flight from Sydney to Perth and then on to Denpasar. Using a self-service checkout, the boy said he could not believe no one at the airport asked why he was alone.

"They just asked for my student ID and passport to prove that I’m over 12 and that I’m in secondary school,’ he told A Current Affair."

"It was great because I wanted to go on an adventure."