Who could have seen this coming

Pubs and restaurants have had their opening hours forcibly cut short by new coronavirus restrictions, which bring in a 10pm curfew for the hospitality sector.

Presumably the rule's intention is to reduce transmission between the public when meeting and socialising, but the end result on Thursday was night was a happy hour crush as hundreds of people simultaneously headed home.

And Thursday was also the day the UK recorded its highest ever daily number of new coronavirus cases - 6,634.

(10pm curfew just meant everyone rolling out onto the streets and onto the tubes at the same time and it was the busiest I’ve seen central London in months) pic.twitter.com/7oWKH5APNG

Video shows hundreds of people in central London, after the 10pm closure, milling through the streets and heading home via public transport.

Kirsty Lewis, who tweeted the clip, said: "10pm curfew just meant everyone rolling out onto the streets and onto the tubes at the same time and it was the busiest I’ve seen central London in months." 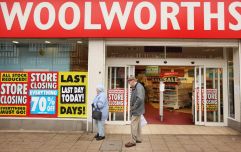 No, Woolworths is almost definitely not coming back to save 2020

END_OF_DOCUMENT_TOKEN_TO_BE_REPLACED

Previously, the area of west London had become a hub of social activity and business as the coronavirus lockdown gradually lifted.

Its streets were pedestrianised, allowing restaurants and bars to seat customers across pavements and roads, as the public flocked back to hospitality businesses.

The government even subsidised restaurant visits with its Eat Out to Help Out scheme and encouraged trips to pubs. Now, they're rowing back.

All bars being forced to close at the same time in Soho, for a nationwide 10pm curfew, created crowds pic.twitter.com/W24pjNklYf


popular
Tunnel footage shows Karim Benzema slagging off Real Madrid teammate
Danny Dyer rages that the people who went to Eton "can't run this country"
QUIZ: Can you identify these world cities on a map?
Bodyguards hired to protect Jordan Pickford after death threats
QUIZ: How well do you remember the football references in Peep Show?
Extinction Rebellion confront David Attenborough at his home after he criticised the group
Everything your football boots say about you as a player

You may also like
News
Turns out coronavirus antibodies last 'just a few months', so that's crap
News
NASA confirms the presence of water on the moon
News
Donald Trump storms out of interview due to 'tough questions'
News
Paul Pogba releases powerful statement in response to 'fake news' from The Sun
News
Paul Pogba accuses The Sun of 'fake news' over France national team story
Next Page