It's been a whirlwind couple of years for Maggie Rogers

Becoming a viral sensation back in 2016 after she took part in a feedback session hosted by Pharrell Williams that saw the N.E.R.D. frontman say he'd never heard anyone like her before, Maggie Rogers is now a star.

END_OF_DOCUMENT_TOKEN_TO_BE_REPLACED

The acclaimed producer/songwriter/performer announced today that she will be releasing a new album very soon. Titled Heard It In A Past Life, it's set to arrive this coming January.

Released in conjunction with the news, her new single, "Light On", is out today. Written by Rogers, she even had a hand in its production alongside Greg Kurstin and Kid Harpoon.

She said of the song:

"This song is a letter to my fans about the last two years of my life. There was so much change that happened so fast, I wasn’t always sure how to make all this stuff feel like me. I was really overwhelmed for a while, and scared too – my life became so public so fast and there were times I wasn’t sure that this was all for me. But I never had doubts about the music. And every night I got on stage and was reminded why I love doing this.

"This is the most vulnerable I’ve felt in a song and it’s me saying thank you for all the light my fans brought me when I couldn’t find it for myself. I love music more than anything else in the whole world and I always have. This song is me actively choosing this life – in my way and in my time. I couldn’t be more excited that 'Light On' is out in the world today."

Featuring the song that put her on the map, "Alaska" will join 11 other records to make up Heard It In A Past Life.

The tracklisting is as follows:

Advertisement
Heard It In A Past Life 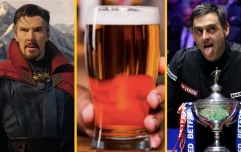 END_OF_DOCUMENT_TOKEN_TO_BE_REPLACED

Aside from the album news, Rogers will also join Mumford & Sons as support on their 2018 UK and U.S. arena tour, which includes The O2 Arena in November.

Tickets go on sale from Friday and the full list of UK dates are below.