Can I take your order, please?

Eminem has officially opened the doors to his new restaurant Mom's Spaghetti - but hungry fans had a surprise when the rapper himself was serving up food and taking orders.

END_OF_DOCUMENT_TOKEN_TO_BE_REPLACED

The spaghetti was priced at $9 but if you were willing to shell out a few extra bucks you could get meatballs or vegan meatballs on top. For the real adventurous people out there, $11 would get you a spaghetti sandwich.

The line to get your hands on some of Eminem's song-lyric-inspired spaghetti reportedly spanned several blocks, with hundreds of eager fans waiting to taste the food. One woman even burst into tears after hugging the rapper, whose real name is Marshall Mathers.

One fan even uploaded a selfie to Instagram alongside the caption: "Ready to die now".

END_OF_DOCUMENT_TOKEN_TO_BE_REPLACED

Mom's Spaghetti is in reference to the 48-year-old's 2002 iconic single 'Lose Yourself', in which he raps: "His palms are sweaty, knees weak, arms are heavy / There's vomit on his sweater already, mom's spaghetti."

The restaurant is part of a partnership with Union Joints restaurant group, which the rapper has worked with before on various pop-ups.

Eminem serving spaghetti during the grand opening of Mom's Spaghetti in Detroit 🍝 pic.twitter.com/JHGFm16Cyz 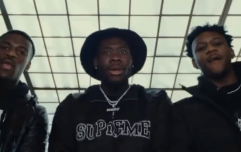 END_OF_DOCUMENT_TOKEN_TO_BE_REPLACED

"We've had a lot of fun putting this project together with the folks at Union Joint," said manager Paul Rosenberg.

"We are really pleased to announce the arrival of the walk-up restaurant and adjacent upstairs store, called The Trailer, where fans can experience a uniquely-curated environment and obtain merch and other items from Eminem and his new pasta operation."

Last year amid the height of the pandemic, Eminem donated spaghetti alongside his partners Union Joints restaurant group. The food went to feeding frontline workers.