Woman stops looking for ideal man, marries the ghost of a 300-year-old pirate named Jack instead

Dating can be harrrrrrd because it's very likely that you'll make a few people walk the plank before finding the hidden treasure, better known as your partner.

END_OF_DOCUMENT_TOKEN_TO_BE_REPLACED

Truth be told, there are times when you feel completely lost at sea and in need of a map to find happiness. That isn't the case for Amanda Teague.

The 45-year-old from Louth, Ireland has recently married the ghost of a Haitian pirate named Jack who died in the 1700s. The fact that he's dead doesn't bother her in the slightest, in fact, Amanda said that they do the exact same things that every other couple enjoys.

This supernatural relationship started in 2014 when she was lying in bed and could feel a strange energy beside her.

Speaking with The Star, she said that "He is my soulmate. I am so happy.It is the perfect kind of relationship for me. There are a lot of people out there who don't know about spiritual relationships, but it could be right for them- I want to get the message out there." 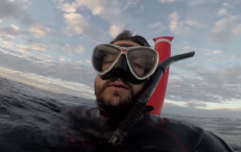 END_OF_DOCUMENT_TOKEN_TO_BE_REPLACED

Regarding the wedding , Amanda sailed into international waters so they could legally get married and she used a spirit medium to conduct the ceremony.

If you're somewhat sceptical about the whole thing,  you'll be able to learn more about their relationship because Amanda and Jack are now co-writing a book that offers advice for any other singletons that might want to find a soulmate that's on the other side.

Hell, it's got to be better than Tindaaaaaaaar.

popular
Incredible case of the only known individual whose parents were two different species
Multiple fatalities after planes collide mid-air over airport
Andrew Tate banned from Instagram and Facebook
Former Playboy Bunnies detail what it was like having unprotected orgies with Hugh Hefner
Court hears cringeworthy poems Ryan Giggs wrote to his ex
The JOE Friday Pub Quiz: Week 308
Footage emerges of Andrew Tate getting knocked out during kickboxing bout
You may also like
Life
Passenger plane dropped 1,200 feet in less than a minute without pilots noticing
Life
Mystery of ancient creature with no anus solved
Entertainment
Kanye West roasted for selling clothes in black bin bags
Life
Mum gives 5-year-old son at-home drills with backpack to prepare him for school shooting
News
Praying man who said 'see you in heaven' tries to open door mid-flight
Next Page