Fair to say the public is on her side.

It's a sad fact of life that some people feel the need to cheat on their partners but for every untrustworthy man or woman, there's a person that's scorned and looking for some payback.

With an influx of 'micro-cheating' trends like 'phubbing' and 'firedooring', it's clear that some people think that monogamy is too cruel a rule (bonus points for any Friends fans that got that reference)

Anyway, aside from these 10 telltale signs that your partner is cheating and the various excuses provided, there's still the perverse pleasure in seeing the guilty party squirm.

For example, do you remember these priceless text messages that were exchanged between a man and his cheating fiancée over the course of five years?

On that note, Channel 5 has decided to conduct a little sociological experiment in their latest show, One Night with My Ex.

In their most recent episode, a couple was discussing the breakdown of their relationship. It turns out that the man, Joseph, was cheating on his girlfriend.

After being caught and dumped, the fella said that he's "well pissed" for being dumped and that his ex, a girl called Rosie, "blew it slightly out of proportion."


After discovering the truth, Rosie packed up all of his stuff and ended the relationship immediately. 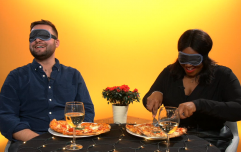 END_OF_DOCUMENT_TOKEN_TO_BE_REPLACED

Rather than apologise, Joseph decided to go on the offensive by accusing Rosie of "pissing" their relationship down the drain.

The whole segment is pretty revealing because he thinks that cheating shouldn't be a dealbreaker.

Since being aired, the clip has continued to go viral and it currently has 1.5 million views while encouraging plenty of online chat.

how are there people like this in the world that actually have this mentality...

What a fucking egg

Cor he's vile! Cheating is cheating. Glad she told him to get out.

People that cheat need to look and listen to this young lady ! This is what your actions do to other human beings.
Think about what you're doing, if you're not happy leave .. don't hurt others !

I don't get why this guy is so confused? What did he expect? pic.twitter.com/Tzt6pamkkA

Joseph has also given his take on things.

Nah winner gets to fight you ya wet anteater


popular
Buying your first house is about to get even more difficult
Manchester United agree terms with Inter Milan for Alexis Sanchez transfer
It was Pierre-Emerick Aubameyang's final but Emiliano Martinez's moment
A must-see Jurgen Klopp documentary on Channel 4 this evening
A definitive ranking of every swear word from worst to best
QUIZ: Can you identify the correct spelling of these brand names?
José Mourinho makes sure you pronounce his name right in new All Or Nothing: Tottenham Hotspur clip