Note to self: do not mess with orangutans

In a shocking piece of footage, an orangutan almost breaks a man's leg while grabbing him through a cage. Aside from showing the frightening near miss, it serves as a reminder not to mess with animals - especially those already in captivity.

END_OF_DOCUMENT_TOKEN_TO_BE_REPLACED

The now-viral clip is said to have originated from Kasang Kulim Zoo in Riau, Indonesia and involves a female orangutan named Tina who, as you can see, quickly becomes agitated as a visitor reaches out his hands.

In the blink of an eye, she decides to grab his t-shirt and start pulling him towards the railings as the man begins to panic and screams for help. You can see the terrifying moment below: 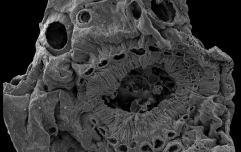 END_OF_DOCUMENT_TOKEN_TO_BE_REPLACED

The man has been identified as Hasan Arifin and according to Indonesian outlets, he climbed over a cement perimeter that she shouldn't have in order to get a close look at the animal. As if to teach him a lesson, his irresponsibly placed camera captures the whole thing.

As the video runs on, you can see Tina's sheer strength and determination as she begins to grab the man's leg and drag him closer to the cage. In this second clip, it looks as though the great ape tries to bite the area around his kneecap and even as the man manages to escape her clutches, she makes one last attempt to put his foot in her mouth.

END_OF_DOCUMENT_TOKEN_TO_BE_REPLACED

Local outlet Riau Saura spoke to zoo’s manager, who said that not only did Arifin "violate the rules by jumping over the guardrail" and filming without permission but also claims that he went on to kick the orangutan as he struggled - noting that Tina is typically a docile animal.

Arifin later apologised for his behaviour and was fortunate enough to survive the close call without any injury; he was later condemned online for distressing the captive primate, whether inadvertently or not.

popular
Multiple fatalities after planes collide mid-air over airport
Former Playboy Bunnies detail what it was like having unprotected orgies with Hugh Hefner
Pilots fly over destination airport at 37,000 feet - because they were both sleeping
Incredible case of the only known individual whose parents were two different species
Man plunges to his death after drawbridge opens as he was crossing it
Gerard Butler breaks silence after death of 'brother in arms' Darius Danesh
'I was close to calling in' - Jurgen Klopp hits back at Gabby Agbonlahor over Man United comments
You may also like
Life
Mum gives 5-year-old son at-home drills with backpack to prepare him for school shooting
News
Praying man who said 'see you in heaven' tries to open door mid-flight
Life
Human remains found in suitcase bought at auction
Life
British bank says it will give customers £175 cash for free
Entertainment
People compare reaction to Tommy Lee's explicit post with the scrutiny Britney Spears is facing
Next Page