Halifax is seemingly locked in a game of cat and mouse with its customers after an announcement that it was adding pronouns to staff name badges didn't go down well with everyone.

The bank shared a photo on Twitter on Wednesday of a name badge for an employee called 'Gemma', with the pronouns “she, her, hers” printed underneath.

While a lot of people supported it, or at least didn't see any reason to take offence with people having the "choice to display their pronouns", not everyone was so willing to accept the change.

They're giving people the choice to display their pronouns, how is this a bad thing?

In a response to some criticism, Halifax told customers to close their accounts if they disagree with its stance. 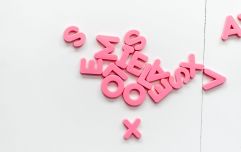 The 20 words women are more likely to know than men, according to an expert

END_OF_DOCUMENT_TOKEN_TO_BE_REPLACED

One person tweeted the bank, asking: "How do I close my account?" Halifax replied: “You can close your account by calling us on 0345 720 3040 or putting your request in writing to: Halifax Account Closure Team, PO Box 548, Leeds, LS1 1WU.”

Halifax said the measure was brought in to prevent "accidental misgendering" and said it was "optional".

One person said there is "no need" for the move, adding they will be "blocking" the bank on Twitter.

Another asked: "Isn't "Gemma" so obviously a she/ her that it doesn't need stating?"

Despite the backlash from some, many customers were quite supportive of the initiative and the need to avoid "misgendering someone".

Indeed, politeness and courtesy matter. Casually misgendering someone is not polite or courteous. So pronouns *do* matter.

Writer and speaker on banking, finance and economics, Cassandra Schadenfreude, wrote: "Indeed, politeness and courtesy matter. Casually misgendering someone is not polite or courteous. So pronouns *do* matter."

Explaining the decision to some people on twitter, Halifax said: “We want to create a safe and accepting environment that opens the conversation around gender identity. “We care about our customers and colleagues individual preferences, for us it’s a very simple solution to accidental misgendering.”

The bank also said the option to add pronouns to staff badges was “completely optional.”

A Halifax spokesperson told LBC: “We want to create a safe and accepting environment that opens the conversation around gender identity. We care about our customers’ and colleagues’ individual preferences so, for us, it’s a very simple solution to accidental misgendering.”

popular
‘Time traveller from 2090’ warns humans of worst event in history in coming days
Groom shocks wedding by playing video of his bride cheating with her brother-in-law
FootballJOE's Missing Shirt Number Quiz
Emergency service workers took photographs of Kobe Bryant’s body 'for a laugh’
Adrien Rabiot's mother has put Man Utd move at risk of collapse
Two British men raped in Spain after being 'drugged while out on night out'
Tory leader in shambolic BBC interview saved by even more embarrassing sign on his bookshelf
You may also like
Music
People are praising Jennifer Lopez for introducing her child to stage as They/Them
News
Putin cites JK Rowling as example as he accuses west of 'trying to cancel' Russia
News
'Gender shouldn’t impact your career choices, yet over a third of young men won’t do my job'
News
Former banker becomes 'genderless reptile' after castration procedure
News
UK Supreme Court rejects gender-neutral passports
Next Page