Tamagotchis, am I right?

It's the 90s. You're a dumb little child. You beg your parents to buy you a Tamagotchi. Eventually, they cave. 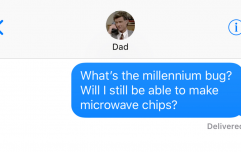 END_OF_DOCUMENT_TOKEN_TO_BE_REPLACED

What follows is a far cry from the jovial experience you were expecting, being plunged into a crash course of the very real implications of the fragility of human life.

You weren't the same person after you'd lived through the death of your first Tamagotchi. Things were different, you became desensitised to the brutality of everyday life.

We weren't ready for Tamagotchis in the 90s. If we're being truly honest with ourselves, even in 2018, we're still not ready.

You've done it, you've finally persuaded your parents to forego their desire for a new camcorder, instead remortgaging the house so that you can own a Tamagotchi. Granted, everyone at school had them months ago and the novelty has pretty much worn off by now, still, it's just nice to be involved even at this late stage in the game. You slurp down another delicious and nutritious glass of Sunny D, then get to work on setting up the device.

It's actually a little trickier than advertised. Firstly, you have to cut the packaging open, which requires parental supervision. Blue Peter is on the telly, so you rationalise that that probably counts. You stab the wrapper with a blunt scissors multiple times, eventually prising the Tamagotchi free. You're hyperventilating with excitement. It even comes with batteries included! All you have to do is pull a small piece of plastic out the side of the device and it's showtime. Before you get cracking, you take a moment to think of a name for your Tamagotchi, eventually settling on Arty, after your favourite show, Art Attack. The year is 1996 and you are an elated sad case, now in possession of a functioning Tamagotchi. 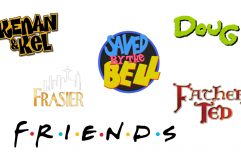 Quiz: Can you identify the 90s TV show based off one single image?

END_OF_DOCUMENT_TOKEN_TO_BE_REPLACED

Now that little Arty is a fully formed digital ball with a smiley face, you settle into your new life as a full-time parent at six years of age. You negotiate a decent contract with your employer, allowing you to juggle both work and family commitments to the best of your ability. After laughing you out of the classroom, your teacher will then request that you return and continue the day without playing with your newborn, which she insensitively keeps referring to as "a toy". Your lack of self control eventually results in Tamagotchis being banned from the entire school, ruining it for everyone.

Nevertheless, you brought life into the world and you're determined to see it through to completion. You opt to travel home from school during lunch each day to feed and tend to your baby, relieving the babysitter for the briefest of moments. He/she charges a hefty fee for childminding, but it's money well spent for peace of mind. At six years of age, it's tricky to get the cash together since you have no job, attend school all day and you are a full-time parent, but you still make ends meet. Theft is okay when it's for a good cause, you remind yourself as you slip another £20 from Mum's wallet. 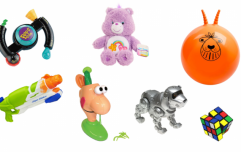 QUIZ: Can you remember the exact names of these 90s toys?

END_OF_DOCUMENT_TOKEN_TO_BE_REPLACED

As you become more accustomed to life as a full-time single parent and your Tamagotchi starts to resemble an actual life form as opposed to an 8-bit inconspicuous blob, you realise that you've gotten the hang of things pretty quickly. Arty enters the terrible twos (weeks old) and your routine is solid. You wake up, clean the baby's overnight deposits, feed it, play for a while, then hit up school for a few hours of peace and quiet. It's not until you get home that your workday really begins, trying to get a decent sleep schedule into your baby's routine and preparing for its eventual evolution in size.

"Being a lone parent is easy", you remark as Arty settles down for the night, finding yourself checking in on his lifeless sleeping body less and less these days. You indulge yourself in a couple of BN biscuits, a handful of Astros and a Mars Delight as a little reward for getting through another hectic day of parenthood. Arty is a good boy, you remind yourself. He's thriving, coming on leaps and bounds with every day. You're starting to see a little beak appear on his face. He's growing more comfortable in his own skin. It's a rewarding job, being a parent. Your mind drifts into dangerous territory where you consider having another one.

FUCK! You've woken up to the sound of two harrowing things. 1) Denise Van Outen's shrill voice on The Big Breakfast and 2) A bleeping Tamagotchi signifying Arty's death. You're beside yourself, bereft and looking for answers. You did everything right, followed it all by the book, but he's gone. Left you for a better world, one where A1 can't top the charts with another mediocre effort, where Blur and Oasis can exist in perfect harmony. Arty has passed away and left behind a trail of sadness. You're broken. Sounds aren't the same anymore, colours are different, smells just don't smell right. Life, as you know it, has ceased to be.

You sink into a dark place, telling your parents you can't possibly attend school for the foreseeable due to the traumatic loss you're undergoing. They laugh and force you to go anyway. How disgusting that they find amusement in the death of their virtual grandson. You try to pull yourself together at the school gates, but it's too late, your classmates spot the puffy cheeks and watery eyes from a mile off. But they don't jest. Instead, they understand. Together, you form a support group for bereaved Tamagotchi parents, sourcing strength in your communal pain. Things start to pick up, you feel more like yourself again. You're ready to get back on the horse.

Stage #5: Realisation That Life Is Garbage

Armed with the emotional stability required to love again, you make the difficult decision to reboot your Tamagotchi. You remind yourself that this isn't going to replace Arty, nothing can. It's just another chance to bring life into this godforsaken world. You birth a brand new baby and quickly fall back into the groove you'd expertly carved before. Still grieving for those left behind, you put all your efforts into ensuring the safety of Arty 2.0. You feed him at regular intervals, clean his poop before it's even gone cold and schedule regular bouts of play. Against all odds, you've learned to love again.

Then a few weeks later, Arty 2.0 dies. The wounds reopen, creating cuts deeper than you can fathom. No support group is a match for your bottomless grief. Twice you've loved, twice you've lost. At just six years of age, you realise that life is garbage, just a relentless cesspit of suffering and despair. There's no pattern to it all, you just experience hardship at regular intervals, then you eventually die. But think of the the good times. Back when you were with Arty and Arty 2.0, giving them your utmost attention to safeguard their survival. Sure, it was a fruitless venture, but at least you were happy for a short time, right before tragedy struck. You reboot your Tamagotchi for the third time. You're ready to love again, regardless of the eventual cost.

popular
Brothers stabbed younger sibling to death through car window in frenzied 30-second attack
Chinese whistleblower claims first Covid outbreak was 'intentional'
Dad sacked his own son from family firm for refusing to get Covid jab
Man poos out of penis and ejaculates from bum due to health condition
Insulate Britain protestor storms off GMB after clash with Richard Madeley
Vegan Bake Off contestant apologises after making non-vegan cake in first week
Jessica Rabbit has been given a 'politically correct makeover' and fans are fuming
You may also like
Entertainment
Friends reunion premiere date announced, along with special guests
Entertainment
QUIZ: Identify 99 movies from the 90s by a single image
Quiz
QUIZ: Can you identify the 90s TV show from a single image?
Quiz
QUIZ: Can you remember the names of these minor TV characters from the 90s?
Sport
If obscure 90s footballers are your thing, you'll ace this quiz
Next Page