Just one example of the incredible bravery Ukrainians continue to show

An 11-year-old boy who travelled 750 miles alone while fleeing the Russian invasion of Ukraine has finally been reunited with his family in Bratislava, Slovakia.

END_OF_DOCUMENT_TOKEN_TO_BE_REPLACED

Hassan Al-Khalaf arrived in Slovakia earlier this month after having left the city of Zaporizhzhia on foot, carrying nothing more than his passport, a plastic bag and a phone number written on his hand that was used to get in touch with his relatives.

Speaking on Good Morning Britain, his sister Luna, sat alongside her other siblings, explained the relief they felt for their mother now that Hassan was safe and sound. Their mum, a widow, could not leave the country as she takes care of their grandmother.

11-year-old Hasan Alkhalaf, who travelled 750 miles alone to flee Ukraine with just his passport and a phone number on his hand, explains, through his sister Luna, how it felt when he was reunited with his brothers and sisters. 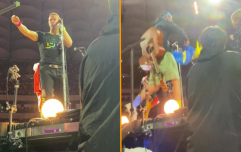 END_OF_DOCUMENT_TOKEN_TO_BE_REPLACED

Though he did manage to catch a train journey that helped him cross almost the entire width of the country to the Slovakian border, the incredible young man reportedly completed a large chunk of the journey on foot. It is unclear how long it took him.

Speaking to Reuters through an interpreter, the Ukrainian "hero" and "inspiration" said it was his mother's "hope" for his safety and future that pushed him to go, remarking: "My hope carried me on my way".

After arriving at the border, authorities quickly used the phone number scrawled on his hand to get in touch with his family, whom he thanked and praised for "helping people they don't even know", adding: "I believe that there will be a happy end."

Having an older brother studying in the neighbouring country, Hassan was fortunate to have somewhere to go, however, not all of the 2.5 million refugees are so fortunate and it is estimated that some 176,000 have crossed over into Slovakia's border alone.

The Russian invasion is said to have resulted in the fastest-growing refugee exodus in Europe since WWII and countries like the UK are being urged to do more, However, Britain's policy on migration remains under heavy criticism.

popular
Two British men raped in Spain after being 'drugged while out on night out'
Groom shocks wedding by playing video of his bride cheating with her brother-in-law
Study finds women have three types of orgasm - including 'the volcano'
Man has hand 'chopped off' outside working men's club in attack like 'a horror film'
Runner finishes last in 400m race as penis keeps falling out of shorts
Brit tourist, 22, ‘raped by wealthy American holidaymaker in hotel toilet’ in Mykonos
Microphone picks up fiery spat between Tom Newton Dunn and Liz Truss following leadership debate
You may also like
News
Russia bans David Cameron, Sir Keir Starmer and Piers Morgan in latest raft of sanctions
Sport
Heroic Everton fan scores in friendly win against Dynamo Kyiv
News
Astonished reactions as American media pundit says we should 'stop dissing Putin'
Entertainment
Scottish city bookies' favourite to host Eurovision next year
News
Dad who left family for Ukrainian refugee has now moved another woman into his home
Next Page