That's certainly one way to check your stomach health

Though this feature is not listed on Apple's website, one woman has discovered that she can record voice notes from within her stomach with her AirPods.

END_OF_DOCUMENT_TOKEN_TO_BE_REPLACED

How did her AirPods get in her stomach, you ask? Well, she ate them of course!

Carli B, who goes by @iamcarliiib on TikTok, shared the story to her account after she allegedly swallowed an AirPod instead of an ibuprofen tablet.

She explains in the video that the solitary headphone was somehow still connected while inside her body. When she sends a voice note to a mate, you can actually hear the sounds from within her body.

@iamcarliiibFinally out of clock app jail. Heres an update on the ACCIDENTAL airpod situation! Algorithm do ur thing ##fyp ##LevisMusicProject ##airpodsjump♬ Oh No - Kreepa

The Bostonian continued to say that she quickly realised what she had swallowed and has now dubbed it the "stomachpod."

Piers Morgan on the Queen's health: 'It's clearly a more serious situation'

END_OF_DOCUMENT_TOKEN_TO_BE_REPLACED

Keeping her cool, Carli tried to throw it up and was "losing her mind." Consequently, she went to the hospital to get an X-Ray and has since "passed" the device.

She explained: "I had an X-ray done a few hours ago and it revealed that the AirPod had passed.

@iamcarliiibFor ✨educational✨ purposes heres what happened when I mixed up my ##airpod and an ibuprofen. Here to share awareness ##LevisMusicProject ##fyp♬ Oh No - Kreepa

"I had a feeling that it had but I just wanted to make sure." 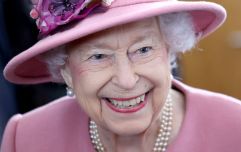 The Queen will not be attending the Remembrance Sunday service

END_OF_DOCUMENT_TOKEN_TO_BE_REPLACED

However what happened to the recently deported headphone? Well, Carli updated her eagerly awaiting fans in a follow-up video.

"Before I disconnected the AirPod from my phone I played the 'find my AirPod' sound and faintly heard it from my stomach.

"So here is where I sent my friend a voice memo about how I ate my AirPod and he couldn't hear it, even after he stepped outside, because it was in my stomach."

She continued: "I was unaware that it was still connected because my other AirPod was in its case, not connected to my phone.

"But the stomach pod was indeed connected and recording."

She added: "It is honestly crazy enough that I am going viral on the Internet for doing something dumb."

Though many of us can't say we have experienced the same thing, at least Carli gave everyone a good laugh.

popular
Woman left mortified after realising why postman ‘rudely’ chucked parcel through door
Woman horrified to find shop employee scrolling through her intimate photos for 15 minutes
Here's how to see who's been taking screenshots of your Instagram Stories
Evra bizarrely congratulates Messi for winning Ballon d'Or, despite winner not being announced
A definitive ranking of every swear word from worst to best
Roy Keane cracks up Carragher and Hasselbaink with league title joke
Jamie Carragher and Roy Keane clash over Cristiano Ronaldo's role at Man Utd
You may also like
Sex
One in five young men suffer from erectile dysfunction
News
Italian doctor known as 'Dr Magic Flute' allegedly offered to have sex with patient to 'cure' cancer
Life
Vet struck off for injecting friends with horse tranquilliser during weekend bender
Sport
Sergio Agüero expected to retire from football due to heart problems
Life
Queen's purple hands spark concern as doctor speaks out
Next Page