Give it to us now

Anyone who grew up in the PlayStation 1 era knew that Crash Bandicoot was where it was at. History has (correctly) recorded the Mario 64 was the defining three dimensional platformer of the era. But if you had a PlayStation, and wanted some platforming between Resident Evil 2 and FIFA 98, Crash was there for you. (Fuck Croc and Pandemonium!).

Last year saw the release of the Crash Bandicoot N. Sane Trilogy, a collection of HD remasters of the original three Crash games – the trio of titles that appeared on the PlayStation 1, and the only three main-series entries developed by Crash’s creators Naughty Dog (before they went on to wow the world with The Last of Us and Uncharted).

And it turns out Crash held a special place in a lot of people’s hearts – the N. Sane Trilogy sold 2.5 million copies, making it one of the best-selling PlayStation 4 games of the year. Obviously, Activision are keen to capitalise on the appetite for old-school PSX platformers, and have also announced that Spyro The Dragon, the little purple firebreather who used to hang with Crash on occasion, is next to get the remastered treatment.

The Spyro games were always good fun – but what really needs a HD remake is Crash Team Racing.


Crash Bandicoot: Warped was the final proper platform game in the series to be released on the original PlayStation, but before they left the franchise for good, Naughty Dog developed the first Crash spin-off: 1999’s Crash Team Racing. As the name would suggest, it was a kart racing game featuring Crash, Coco, Neo Cortex and the rest of franchise’s cast. Much like Mario Kart, the focus was not on speed, but instead firing off various weapons and taking out the other racers. 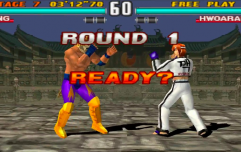 END_OF_DOCUMENT_TOKEN_TO_BE_REPLACED

In the same way that the main Crash games weren’t quite as good as Mario 64, but still beloved by those who grew up with them, CTR wasn’t necessary a Mario Kart-beater, but it was loved kids who had PlayStation instead of an N64. It was fast, fluid, and offered a very entertaining four-player mode. It was also fully 3D - something that Mario Kart 64 wasn't - and featured an innovative single-player campaign, a feature often missing from racing games.

There has been a handful of other Crash racing games – including Nitro Kart and Tag Team Racing – but none of them hold a candle to the original CTR. The public clearly wants more Crash games, and since there seem to be no new games on the horizon, how about giving us a nice spruced up version of CTR, complete with online play – and maybe throw Crash Bash in with the package as well?

Of course, the PlayStation Classic is on the way, and CTR could definitely make an appearance on that.

For years, kart games have been a lazy way to get a cheap buck out of a popular IP. Outside of Mario Kart and Diddy Kong Racing, they’re nearly always terrible. Remember South Park Rally? Or Nicktoons Racing? Let alone cheap trash like M&Ms Kart Racing or Crazy Frog Racer. Crash Team Racing bucked that trend, being a really fun game that didn’t just rely on having a familiar face on the cover. Give us a chance to relive it in glorious HD.


popular
What is 'Everton'? A series of questions, answered
THE JOE FRIDAY PUB QUIZ: WEEK 174
Roy Keane is angry at everything bar his own tedious punditry
Tickets for UFC London are about to go on sale
QUIZ: Identify which European clubs these 20 badges belong to
QUIZ: Name the English Football League clubs beginning with the letter ‘B’
How will Liverpool's new Nike shirts look next season?

You may also like
Gaming
Crash Team Racing Nitro-Fueled is exactly as you remember it, for better or worse
Entertainment
QUIZ: Tell us the name of these PS1 games from their screenshots
Entertainment
First confirmed details on the PlayStation 5 released and we now know it's backwards compatible
Entertainment
Possible PlayStation 5 price and launch titles leaked
Sponsored
React to these annoying everyday situations and we'll give you a game to play
Next Page